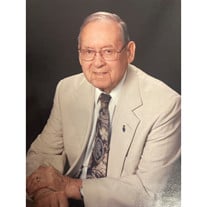 Wilmer C. Samples, 97, died peacefully on January 22, 2022. He was born in Churchville, VA on November 4, 1924. Wilmer was predeceased by his wife or 71 years Nellie (Price), sisters Fay, Judith and brothers, Norman, John, Sonny, and Richard. He is survived by sister Nancy Hilbert (Staunton VA), son Jerry (Kathy) (Johnstown Pa), grandchildren Christopher (Johnstown, PA) and Steven (South Daytona Beach, FL) and three great grandchildren. Wilmer was a veteran of World War II serving in the Philippines and Korea. After service he returned to Virginia working as a loom repairman. He moved to Glen Cove, NY in 1951 where he became an automobile mechanic and eventual owner of his own business in Port Washington, NY. He retired and moved to the Village of Silver Lake in 1988. Wilmer was actively engaged with the Lady Lake United Methodist Church where he and Nellie chaired the Building Committee for the new sanctuary building among other church related activities. He loved working at the church and meeting new members from around the country. In 2013 he was part of an Honor Flight to visit the WWII memorial. This was the highlight of some stressful years while caring for Nellie. He was a member of the American Legion, the VFW and BPOE. Visitation is 10:00 - 11:00 AM, Thursday, January 27, 2022 at the Lady Lake United Methodist Church with funeral services immediately following. Internment follows at Lakeside Memory Gardens, Eustis. Arrangements entrusted to the Beyers Funeral Home, Lady Lake. In lieu of flowers, contributions to the General Fund, Lady Lake United Methodist Church, 109 W. McClendon Street, Lady Lake, FL 32159.

The family of Wilmer Clark Samples created this Life Tributes page to make it easy to share your memories.

Send flowers to the Samples family.