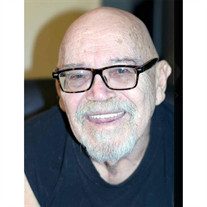 William Clark Staton, 81 of Tavares, Florida, passed away on October 11th 2021 in his home. Bill was born in Wyandotte, MI on February 8, 1940, the son of Clark and Ellen Staton of Mt Dora, FL. Bill graduated Mt. Dora High School, Class of 1957. He proudly served our country in the United States Navy. Later he worked as a government contractor, which increased his family's traveling even more than the Navy. Bill was an avid fisherman who enjoyed spending time with his family and great-grandsons. In addition to his parents, he was predeceased by his wife Anna R. Staton. He is survived by three brothers, Clark, Allan(Kathy) and Larry Staton. As well as his beloved three daughters Robin Silk of San Mateo CA, Tari and Kent Huddleston of Corona, CA, Jeri Jae and John Roberts of Leesburg, FL. He leaves four wonderful grandchildren Jeriana (Rob) Staton-Hemb, Christian, Brandon and Jackson Mendoza, Myles Huddleston; and two great-grandsons Taylor and Morgan Staton. Family and friends will gather and remember Bill and his wife Anna on Tuesday, February 8th, 2022 at 12:30 P.M. at the Florida National Cemetery, 6502 S.W. 102nd Ave. Bushnell, FL 33513 including Military Honors. In lieu of flowers, gifts in Memory of Bill and Anna may be made to the The Leukemia & Lymphoma Society. Online Condolences may be left at www.beyersfuneralhome.com Arrangements entrusted to Beyers Funeral Home and Crematory, Leesburg, FL.

The family of William Clark Staton created this Life Tributes page to make it easy to share your memories.

William Clark Staton, 81 of Tavares, Florida, passed away on...

Send flowers to the Staton family.