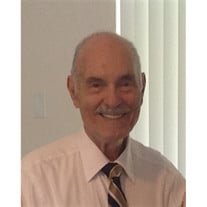 William Anthony Sanchirico was called home to be with the Lord on January 3, 2022 at the age of 92. William was a faithful man who loved the Lord, his family, and his community. He was a kind soul, a light to the world and will be missed by many who loved him dearly. The world lost a great brother, father, grandfather "Pop" and great grandfather. He is predeceased by his father, mother, sister and wife. William was born in the Bronx, New York on April 3, 1929. He grew up there and eventually joined the U. S. Army. After, William moved to New Jersey where he met the love of his life Elizabeth Tegzes. They married and were blessed with four children. They had two children, Billy and Linda in New Jersey and later after relocating his family to Florida, they had two more children Debra and Laura. William was born to play the piano. As a very successful musician, he was offered many rising opportunities, but chose his family over fame. While living in New Jersey, Williams's father introduced him to the piano's 88 keys. He started down the classical path, but later he decided to veer into the jazz path. Sometimes he would play for 3 hours at a time. While serving in the U.S. Army, William played in the band entertaining his troops. Music became his career and he worked in a variety of private clubs such as The Playboy Club, The Jockey Club, The Inverrary, The Hamlet, and Fisher Island all located in South Florida. William finally retired and he and Elizabeth moved to The Villages where they resided for 20 years. He is survived by his four children Billy and his wife Dena, Linda and her husband Alex, Debra and her husband Daniel and Laura and her husband David. They had four grandchildren Kristina, Nicholas, Tiffany and Taylor, and seven great grandchildren Liam, Mason, Aubrey, Jax, Kai, Carly and Scarlett, as well as his extended family and an abundance of friends. We will all miss him more than words can say. While he will be missed by many, we take comfort in knowing that he is again in the presence of his beloved wife Elizabeth, who passed in 2021, as with the angels. William is now at peace surrounded by light in his Heavenly home with our Heavenly Father. He was extraordinary, selfless and a talented genius. He was and always will be immensely treasured and loved. Also, the family would like to extend their sincerest gratitude towards Beyers Funeral Home and Crematory in Lady Lake for being very accommodating and understanding during this difficult time.

William Anthony Sanchirico was called home to be with the Lord on January 3, 2022 at the age of 92. William was a faithful man who loved the Lord, his family, and his community. He was a kind soul, a light to the world and will be missed by... View Obituary & Service Information

The family of William A. Sanchirico created this Life Tributes page to make it easy to share your memories.

William Anthony Sanchirico was called home to be with the Lord...

Send flowers to the Sanchirico family.