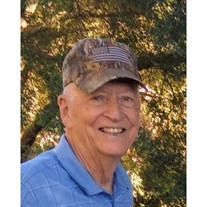 William A. Kicklighter,86, of Umatilla FL passed peacefully at home Monday, March 21, 2022. He is survived by his beloved bride of almost 65 years Elizabeth "Betty" Kicklighter; his daughters: Donna K. Nelson of Eustis, Diane K. Hammon (Rusty) of Wesley Chapel who were the pride of his eye; his loving brothers: Ralph Kicklighter (Myra) of Astor and Pat Kicklighter (Louise) of Umatilla and his three treasured grandchildren: Eric Nelson, Galina Nelson and William Asa Hammon. William was born in Oceanway Jacksonville, FL May 17, 1935 and at the age of 7 moved to Umatilla where he was a lifelong resident. He graduated with the Class of 1953 from Umatilla High School. Having lost his father early in his life, William held a variety of jobs during high-school to help support his mother and siblings which honed his high work-ethic. William served in the U.S. Army, 1st Battle Group, 9th Calvary, which included a year of service in South Korea. Upon his return to Umatilla, he devoted over 40 years, in a variety of progressive positions to Umatilla State Bank which later became United Southern Bank. He started his career as a Bank Teller in 1954 and through hard work and diligence his career culminated as the President and CEO during which he led the bank through significant growth and expansion. A revered leader by the USB family, William would be the first to say any success he achieved professionally was not due to him, but instead the incredible group of employees at USB. During his extensive banking career, he served in leadership positions in various organizations relating to the banking industry including: Independent Bankers of Florida; American Institute of Banking, of which he served as President of Lake-Sumter Chapter of A.I.B; Florida Bankers Association - serving on multiple FBA committees; and was presented a distinguished service award from the Florida Bankers Insurance Trust for eleven years of service and four years as chairman. William attended Stetson University, with interest in a music degree, and was a graduate of LSU School of Banking of the South. Strong community involvement was an important personal principle to William. He was a member and President of the Umatilla Jaycees, President of the City Council of Umatilla, Director of Pine Meadows Golf and Country Club, Board member of the Electron Machine Corporation, member of the Umatilla Re-development Committee, board member of Lake County United Way, and board member of Lake County Hospice and American Heart Association of Lake County. In 1985, he was selected as Mr. Umatilla by Umatilla Chamber of Commerce and he was the recipient of the Lake Sentinel Community Service Award in 1994. William professed Jesus Christ as his Lord and Savior and he lived his life with a grace-filled servant's heart. He was deeply involved in the First Baptist Church of Umatilla for over 65 years serving as a Sunday school teacher, deacon and trustee, and on numerous committees pertaining to growth and finances of the church. He willingly and graciously served in any capacity which his gifts and talents could be used for the benefit of God's Kingdom. William had a gifted tenor voice and sang in the church choir for most of his life, a few weddings and funerals. Most enjoyable and memorable were quartets with his brothers and his infamous singing of 'Happy Birthday' every year to family members. After retirement in 1997, William enjoyed doing the things he loved the most - being with his bride, working in the yard and creating a "slice of heaven on earth", creating many wood working projects, spending time with family, and traveling. William was preceded in death by his father and mother, Lloyd and Mattie Webb Kicklighter; siblings J.L. Kicklighter, Herman Kicklighter, and Zedna K. Weaver. William is buried at Umatilla Annex Cemetery in Umatilla, Florida. A celebration of life will be held on April 9th at 11:00 AM at First Baptist Church of Umatilla with Pastor Brooks Braswell officiating. In lieu of flowers please consider donations to First Baptist Church of Umatilla designated to Reaching Forward (building campaign). Contact (352) 669-3214 for additional information. Philippians 4:13 I can do all this through him who gives me strength.

The family of William Alfred Kicklighter created this Life Tributes page to make it easy to share your memories.

William A. Kicklighter,86, of Umatilla FL passed peacefully at...

Send flowers to the Kicklighter family.