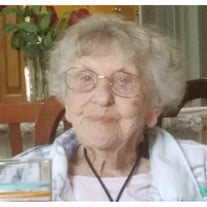 Wanda Lee (Back, Wyatt) Altizer Born October 1927 Entered Heaven December 23, 2021 Wanda Altizer, who was raised in Corbin Kentucky, moved numerous times while saying, "Dennis, this is the last time I'm moving." Firstly, she became part of the great Appalachian Migration to the "North" in 1955. Her first husband, Russell Wyatt, took a factory job in Ohio and then, a couple of years later, another GM factory job in Indiana. Wanda and the two youngsters became immigrants. The automobile factories paid a decent wage. Then, in the mid 1960's Wanda became a single mom with teen daughter Donna and pre-teen son Dennis. Her husband had passed away after a lengthy illness. With just a high school education she faced a daunting task: earning a living for the family of three. Wanda had always dreamed of attending college. Her months as a caregiver for her ailing husband, inspired Wanda to move back to Ohio to successfully become a Licensed Practical Nurse. The move to Ohio was just one of many moves to come. The blond spinet piano (a gift from Russell), during its lifetime traveled in moving trucks and trailers around 15 times. In 1965, the move to Largo Florida proved to be somewhat dramatic and dangerous. The trailer with all the worldly possessions was attached to the bumper of a 6-cylinder 4 door Chevy sedan. Somehow, we three traveled at night via winding dark two lane roads through the mountains of Kentucky, Tennessee, and Georgia. Florida welcomed us with a free paper glass of orange juice. Wanda's strong belief in Jesus and his teachings, led her to quite often ask for assistance from Christian Churches and/or Churches of Christ. She would pop into a random church office and ask for help. As we landed at 1st Christian Church in Largo, they helped us. The organist's husband found a rental house for us. Donna started her 13th different school. Our Mom went to work in a Christian Bookstore. After a few months working with a very incompetent owner, she gathered up all her savings and courage and opened up a competing bookstore. Which became very successful. Wanda loved ordering inventory and interacting with customers. Business Woman Wanda became financially solvent. Donna went to college. Dennis went to college. "Thanks Dad" for being a veteran. Much of the tuition, books, and other expenses were paid by the US Government. Wanda, however, now lived alone. She sold the Bible Book Store. Then she followed her daughter to Dodge City KS as Donna worked as an Associate Staff member at the church. After Donna married, Wanda returned home to Largo. She worked as a nurse for a while, then she sold her home and moved to Carter County Tennessee to a rented mountain cabin. Guy Mauldin and Dennis moved the beloved piano up a snowy hillside using 2 x 10 planks. The cabin was drafty and cold. So... Wanda bought a home in north Johnson City TN. Her next adventure? Raising earthworms to sell. But the new house didn't lend it self to a worm farm. She bought another house in south Johnson City with a large basement for the worm factory. Still alone in 1981, she answered a few lonely-hearts classified ads. Wow. Quite a menagerie of potential suitors contacted her. She married suitor Jim Altizer and moved to Louisville KY...with the piano. About a year later (maybe 1983), Jim and Wanda moved to central Florida...with the piano. Why Lake County? In the 1960's, my paternal grandparents vacationed at a Fishing Camp on Eagles Nest Road. Wanda continued to work locally as a Licensed Practical Nurse until finally retiring. She and husband Jim fished on Lake Griffin almost daily. Daughter Donna and her family moved from Dodge to Leesburg. Wanda enjoyed the grandkids. Wanda continued her strong commitment to the Kingdom of God as she worshiped with First Christian Church. Jim passed away in 2003. Wanda's world slowly became smaller as she aged in her own home. She didn't mind giving up driving, but when she was unable to go fishing...yikes. Both her children, grandchildren, great grandchildren and extended family were a valued support group. Their joyful and helpful relationship with Wanda certainly made her quality of life better. As a side note, a vintage blond spinet piano awaits a move to a new home. Less than 100,000 miles on it. Still has original bench seat. Plays major chords and minor ones. The notes were seldom off key. Owner hates to lose it, but it has to go. Be assured Wanda is living in heaven. Saint Peter probably had a brass band to welcome her. One of her favorite song lyrics: "Lord build me just a cabin in the corner of gloryland In the shade of his tree of life that it may ever stand Where I can hear the angels and shake Jesus' hand Lord build me a cabin in the corner of gloryland." Curtis L. Stewart "Participate joyfully in the sorrows of the world. We cannot cure the world of sorrows, but we can choose to live in joy." - Joseph Campbell "So will it be with the resurrection of the dead. The body that is sown is perishable, it is raised imperishable; it is sown in dishonor, it is raised in glory; it is sown in weakness, it is raised in power; and it is sown a natural body, it is raised a spiritual body. If there is a natural body, there is also a spiritual body." 1 Corinthians 15:42-44 Arrangements entrusted to Beyers Funeral Home of Lady Lake, Florida.

The family of Wanda Lee Altizer created this Life Tributes page to make it easy to share your memories.

Send flowers to the Altizer family.