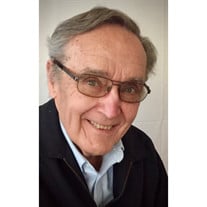 Thomas Daniel Speidel, 83, of Oxford, Florida passed away on February 2, 2022. He was born April 10, 1938, in McKeesport, PA to Alfred and Ruth McLean Speidel. Mr. Speidel was a longtime Chemistry teacher working in the Michigan School system. He attended Adrian College where he received his B.S. degree in chemistry, was a member of the ATO fraternity and met the love of his life at their social dance class. Winning a National Science Foundation grant led him to earn his M.S. in Chemistry from Emporia State College 30 hours in Chemistry from Ithaca College. He began his 34-year teaching career in Deckerville Michigan and concluded teaching Advanced Placement Chemistry at Southfield Lathrup High School. Upon retirement, he and his wife became "snowbirds" wintering in Florida before finally settling there permanently from Commerce, MI in 2013. An avid woodworker, he created special toys for his grandchildren as well as many toy drives over the years. Tom was especially talented at carving and turning wood. He created beautiful pieces that will be treasured for years to come. After retirement, Tom and his wife Irma enjoyed traveling extensively with the "Nomads" a group affiliated with the United Methodist mission outreach in which teams of retirees in RVs traveled across the United States to meet up at a common site, offering volunteer labor to church camps, children's homes, and churches in need. Tom and Irma spent many years serving the Lord and making special friends. Another volunteer mission that Tom passionately participated in was the Personal Energy Transportation (PET) Project. The group is dedicated to assembling and providing scooters for disabled individuals in disadvantaged countries. Survivors include his college sweetheart and beloved wife of 61 years, Irma of Oxford, FL; sons Doug (Karen) Speidel of San Jose, CA and Brad (Jann) Speidel of Terre Haute, IN; grandchildren: Kristina (Eli) Burch, Jacqueline Speidel, James (Alex) Speidel, Meghan (Andrew) Grimes, Matthew (Hannah) Speidel and Kathryn Speidel; all of whom will think of him whenever they hear the song "Zip It Dee Do Da," great-grandchildren: Allie Pierce, Adaline, and Aiden Speidel. A celebration of life will be held at a later date. The family asks, if it is your desire to do so, that any memorial contributions in honor of Tom be made to the PET project. You can do so through Mobility Worldwide at https://mobilityworldwide.networkforgood.com Arrangements entrusted to Beyers Funeral Home and Crematory, Leesburg, FL.

Thomas Daniel Speidel, 83, of Oxford, Florida passed away on February 2, 2022. He was born April 10, 1938, in McKeesport, PA to Alfred and Ruth McLean Speidel. Mr. Speidel was a longtime Chemistry teacher working in the Michigan School system.... View Obituary & Service Information

The family of Thomas Daniel Speidel created this Life Tributes page to make it easy to share your memories.

Thomas Daniel Speidel, 83, of Oxford, Florida passed away on...

Send flowers to the Speidel family.