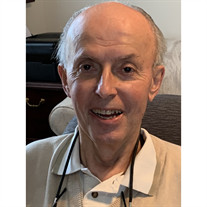 Thomas MacDonald Rice, 78, of Lady Lake Florida passed away peacefully at Cornerstone Hospice on January 11, 2022. Tom was born in Buffalo, NY November 6, 1943, to Josef and Fern Rice who were teachers. He, along with his sister Barbara, grew up in Oakfield, NY. After graduating from Oakfield- Alabama High School, Tom attended Michigan State University where he received a Bachelor's Degree in Physics and Mathematics, and a Master's Degree in Optical Physics. While at Michigan State, Tom met and married his wife H. Susan (Simmons) Rice. Upon graduation, Tom and Sue moved to Fairport, NY. Tom worked as an engineer for Eastman Kodak in Rochester, NY. He was part of many projects during his tenure at Kodak, including the Kodak Disc Camera and the first 8MM Kodak Video Camera. Tom and Sue welcomed three children while living in Fairport. In 1986 Tom moved his family from Rochester to Nashua, NH where he worked for a subsidiary of Kodak as a project manager in the Newspaper Industry. He received his Master of Business Administration from Boston University graduating first in his class. Following his graduation, Tom took an early retirement from Kodak and formed his own business called Cardinal Consulting where he managed projects for many newspapers including The Wall Street Journal, The Philadelphia Enquirer, and the Minneapolis Star Tribune. In 2001 Tom and Sue moved to the Harbor Hills Community in Lady Lake, FL. Tom was a wonderful man who loved to travel, play golf, and cards, but above all he loved his family immensely. He is survived by his wife of 57 years, Sue Rice, his three children, Steve Rice, Julie (Rice) Held, Jeffrey Runcie-Rice, their spouses and his seven grandchildren. He is also survived by his sister, Barbara (Rice) Wills of Muncie, Indiana. A celebration of life will be held for Tom in late March at Northlake Presbyterian Church in Lady Lake, FL with a reception to follow. In lieu of flowers the family requests that donations be made to the Harbor Hills Ladies Charity, c/o Nancy Flood 5950 Spinnaker Loop, Lady Lake, FL. 32159. Arrangements entrusted to Beyers Funeral Home of Lady Lake, Florida.

Thomas MacDonald Rice, 78, of Lady Lake Florida passed away peacefully at Cornerstone Hospice on January 11, 2022. Tom was born in Buffalo, NY November 6, 1943, to Josef and Fern Rice who were teachers. He, along with his sister Barbara, grew... View Obituary & Service Information

The family of Thomas MacDonald Rice created this Life Tributes page to make it easy to share your memories.

Send flowers to the Rice family.