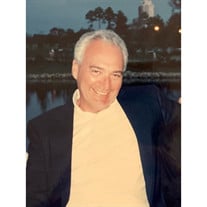 Thomas Edward Kister, 84, of Leesburg, Florida passed away peacefully in his home, with his family by his side, on January 13, 2022.Thomas was born January 1, 1938, in Cleveland, OH to Elmer and Wilma Jean (Hawkins) Kister. He proudly served his country during the Korean War as a member of the United States Air Force. He enjoyed a 50-year career as an executive salesperson in various specialties. He had a lifelong love of sports, especially for his hometown Indians, Browns and The Ohio State Buckeyes. Locally, Thomas was a member of the Welcome Home Christian Church and volunteered with the thrift shop, the Leesburg library, and as a tutor in the Leesburg city school district. Above everything else he put his family first. He had an incredible ability to connect to the hearts of his wife, daughters, and grandchildren. He always knew how to ask all the right questions and if you were with him - you were the most important person in his world and you felt like you could do anything in the world. He brought so much joy to his family and could always be counted on: driving his girls to school after a missed bus ride, playing hide and go seek with his sweet wife "boo boo bear" after a long day of work, going to his grandson's double header or his granddaughter's volleyball game. Showing up was what he did. He would encourage you, support you and love you unconditionally for who you were - no matter what. He was selfless, genuine, kindhearted, and loyal. No matter what he did, big or small, he gave it everything he had. He never gave up on anything or anyone. He was the glue that held his family together. Some people's legacy is a name on a building or a large financial gift; but his legacy was a legacy of Godly character, a true demonstration of unconditional love, and a rich family legacy. He is survived by his wife of 61 years May "Debbie" Kister of Leesburg; daughters: Teri (Greg) Alexander of Charlotte, NC, Pamela (Dr. Scott) Brady of Windermere, FL; grandchildren: Alex (Lindsay) Krivanek, Alli Krivanek, Abigail Brady, Lydia Brady, Sarah Brady, Hannah Brady. As well as Monica Ball of London, England, who holds a very special place in his heart. A Funeral Service will be held on Monday January 17 beginning at 4:30 PM in the Chapel of Beyers Funeral Home, Leesburg with a visitation 1 hour prior. A private interment including Military Honors will be conducted at Florida National Cemetery, Bushnell, FL. In lieu of flowers the family has asked all donations be made to St. Judes Childrens hospital. Condolences may be left at www.beyersfuneralhome.com, arrangements entrusted to Beyers Funeral Home and Crematory, Leesburg, FL.

Thomas Edward Kister, 84, of Leesburg, Florida passed away peacefully in his home, with his family by his side, on January 13, 2022.Thomas was born January 1, 1938, in Cleveland, OH to Elmer and Wilma Jean (Hawkins) Kister. He proudly served... View Obituary & Service Information

The family of Thomas Edward Kister created this Life Tributes page to make it easy to share your memories.

Send flowers to the Kister family.