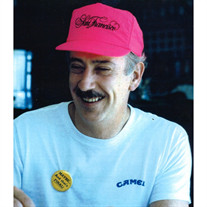 DAMERON, Thomas Owen, born December 16, 1947, died Thursday, October 28, 2021, at UF Hospital in Leesburg, Florida, after a valiant fight with cancer and heart disease. The son of William Dameron and Carolyn Jones Dameron (both deceased) is survived by his brother, William Dameron, Jr., sisters, Denise Cone and Laurie Dameron, all of Boulder, Colorado, and a brother, John Dameron, of Atlanta, Georgia. Though Tom was born in Denver, Colorado, his family moved to Berea, Ohio. He soon began his life-long passion for swimming as a member of the Berea competitive swim team followed by competing for the Berea High School team. He also swam for the Miami University in Oxford, Ohio. In 1968 he joined the US Navy and UDT training. After a neck and shoulder injury, he returned briefly to Miami University. Tom moved to Ft. Lauderdale and worked at the Hall of Fame swimming pool and lifeguarded on area beaches, a certification he maintained throughout his life. He also developed a passion for cycling which led to participating in Tri-Athlons. Tom moved to Atlanta, Georgia, and opened his first of many bar and restaurant related businesses along with a party supply store which eventually led to real estate investment. Upon retirement Tom returned to Florida to be closer to his beloved water and cycling trails. With his acerbic wit and easy manner, Tom garnered life-long friends from his youth through retirement. Near his death he was surrounded by these friends and family.

The family of Thomas Owen Dameron created this Life Tributes page to make it easy to share your memories.

Send flowers to the Dameron family.