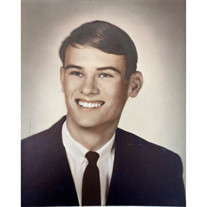 Thomas Roy Burns, Jr., 72 Thomas "Roy" Burns, Jr. of Groveland, Florida, passed away April 8, 2022 at South Lake Hospital. Born December 22, 1949, Roy was the eldest son of Thomas and Dorothy Burns, lifelong residents of Groveland. Roy graduated from Groveland High School in 1967 and attended multiple colleges across the state. His very adventurous and curious spirit lured Roy and a few friends to strike off to travel the country. Roy drove across the U.S. to California and up to Alaska, camping all along the way. Roy later moved to Orlando and worked for many years at Rosie O'Grady's where he made numerous friends and met his first wife Rose. During those years Roy's interests turned to the sky. He learned to fly, earned his pilot's license and loved to go hot air ballooning. Roy and Rose had one daughter, Kim Burns of Clermont. Roy moved back to Groveland and went into a novel business with his brother Glenn. Glenn and Roy taught themselves how to grow huitlacoche, a food delicacy grown from corn. Upon Roy's passing he was the only supplier in the country of fresh huitlacoche. Roy was preceded in death by his parents, his brother, Glenn, and his former wife, Rose. He is survived by his daughter Kim Burns, grandchildren Dallas and Jax, his wife Margot, his three sisters, Anita Karst of Tampa, Connie Phillips of Groveland and Lori Cunningham of Baton Rouge and numerous nieces and nephews. Everyone who knew Roy loved his humor, wit, friendly nature and big heart. He was quite the character and will be greatly missed. A graveside service will be held at Empire Church Cemetery, 11:00 Tuesday, April 12th. The cemetery is located southwest of Groveland on Empire Church Road. After the service all are welcome to a reception at Isola Farms, 1248 Bay Lake Loop, Groveland.

The family of Thomas Roy Burns created this Life Tributes page to make it easy to share your memories.

Send flowers to the Burns family.