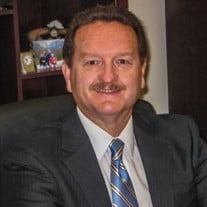 Pastor Terry Keith Weaver went Home to be with the Lord on May 20, 2022, at age 68, after a short battle with cancer. Terry was born to Keith and Frances Weaver on September 5, 1953, in Lansing, Michigan. As a boy, he attended Sunday School where he heard the gospel and his mom (Frances) led him to the Lord. He met his wife, Connie, at Everett High School, Lansing, Michigan, and were married on June 16, 1973. He is a graduate of Grand Rapids School of the Bible and Music and Grand Rapids Baptist College and Seminary, Grand Rapids, Michigan. After serving as youth pastor in Lansing, Michigan for 10 years, the Lord led him and Connie, and their two children, Amy and David, to Florida to begin a church plant in North Port, Florida. In November of 2003, God led him to serve as Senior Pastor at Berean Baptist Church in Leesburg, Florida, where he faithfully pastored until his last few months. He loved to preach and teach the Word of God, and he loved to share the gospel message to everyone he encountered. He was a very generous, loving, caring, and fun husband, father, grandfather, son, and brother. He attended every event of his children and grandchildren that he could- mostly sporting events. He would be one of the loudest fans! Terry joins his parents and both sets of grandparents (Carl and Alice Weaver and Joe and Ora Robinson) in Heaven. He is survived by his wife, Connie; his daughter, Amy Goebert (husband Bryan); his son, David (wife Lisa); his 8 grandchildren: Ethan, Alyssa, Caleb, and Levi Goebert (Amy and Bryan’s children), and Wesley, Kelly, Tyler, and Harper Weaver (David and Lisa’s children); his sisters, Cindy Dowell (husband Niles), Lani Mount (husband Terry), and Lori Weaver; and his nephew, Kevin Estfan (wife Robin). In lieu of flowers, if you would like to give a donation in his memory, please give to the mortgage fund of Berean Baptist Church. His desire was to have that paid off before his upcoming retirement in 2023.

Pastor Terry Keith Weaver went Home to be with the Lord on May 20, 2022, at age 68, after a short battle with cancer. Terry was born to Keith and Frances Weaver on September 5, 1953, in Lansing, Michigan. As a boy, he attended Sunday School... View Obituary & Service Information

The family of Terry Keith Weaver created this Life Tributes page to make it easy to share your memories.

Pastor Terry Keith Weaver went Home to be with the Lord on May...

Customized sympathy cards. Mailed for you.