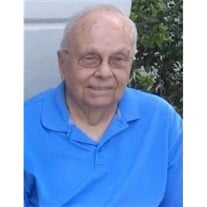 Teddy Reece Nunley died peacefully on March 16, 2022 at Estelle's Hospice Center in Ocala, FL with his family by his side. He battled Multiple Myeloma for years and most recently Leukemia. He fought this awful cancer with strength and bravery and kept a positive attitude and sense of humor through it all. He will be buried with military honors in the Florida National Cemetery in Bushnell, FL on March 22, 2022. Teddy was born in Tracy City, Tennessee on April 28, 1939. He moved kicking and screaming with his family to Davenport, FL when he was 15 years old. After an adjustment period, he accepted Florida as his home and grew to love it...mostly because of his new friends and the great fishing locations. He continued to love the mountains, however, and in his retirement years he built a beautiful home in Tennessee with a majestic view of the mountains. After becoming ill with Multiple Myeloma, he returned to Florida and made his home in Summerfield, FL. Teddy graduated from Haines City High School in 1957. Being a little guy, but loving football, he was happy to be the manager of the football team. It was at HCHS where he met the love of his life, Helen Bass Nunley and they were happily married for 63 years. He used to smile and tell everyone he had caught a 92-pound bass! After working a year and attending a mechanic's school in Nashville, Teddy joined the US Army. After training and schools, he had a two-year tour in Germany. Helen joined him for the second year. After his military service, they returned to Davenport, FL where they lived until retirement. Teddy had a career in auto/truck mechanics and was highly respected for his knowledge of the auto parts industry. He knew every part ever made for these vehicles and was an expert in his field. He loved fishing (mostly for bass), NASCAR, college football and playing a few rounds of golf occasionally. He was an expert, I'd say master, gardener! He could grow anything...even his weeds were pretty. His yard and abundant vegetable garden were always the envy of his neighbors. He also enjoyed woodworking and had a large workshop with every tool imaginable. He made many pieces of furniture which are still enjoyed by the family. His parents, Irene Holt Phipps and Melvin Reece Nunley preceded Teddy in death. Helen and Teddy also lost their infant daughter, Melody Blair Nunley, in 1964. He is survived by his wife, Helen, their son, Randall Clay Nunley, and daughter, Sandra Nunley Baber (Keith). They have three grandchildren, Kristofer Baber (Katlyn), Lauren Baber and Kyle Baber and one adorable great-granddaughter, Paisley Baber. He is also survived by his brother, Bobby Jack Nunley and his sister, Bonna Eldridge Cornett (Joel), his sister-in-law, Josephine Bass Welch (Larry) and many nieces, nephews, cousins, and friends, Teddy had fond memories of his early years in Tennessee and then living in a small Florida town with lots of friends. The stories he would tell!! He was known to be a little "ornery" at times, but his sense of humor, big heart and love for his family is what we remember most. He will be greatly missed. The family wishes to express a special thank you to their dear friend and neighbor, Pauline Cochin Morin for her constant love and support. In lieu of flowers, the family requests donations be made to Hospice of Marion County specifically for Estelle's Hospice House at P.O. Box 4860, Ocala, FL 34478. Arrangements entrusted to Beyers Funeral Home of Lady Lake, Florida.

Teddy Reece Nunley died peacefully on March 16, 2022 at Estelle's Hospice Center in Ocala, FL with his family by his side. He battled Multiple Myeloma for years and most recently Leukemia. He fought this awful cancer with strength and bravery... View Obituary & Service Information

The family of Teddy Reece Nunley created this Life Tributes page to make it easy to share your memories.

Send flowers to the Nunley family.