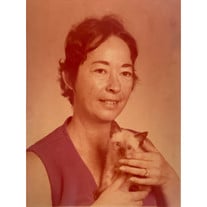 Susy Brown May 21, 1934 - April 24, 2022 Susy Brown of Fruitland Park, Florida departed this Earth peacefully on April 24, 2022. Susy was born Susy Jeanne Cook on May 21, 1934 in St. Petersburg, Florida to parents Jeanne DeGuire Cook and Sam Salisbury Cook. Raised in St. Petersburg, Susy graduated from St. Petersburg High School in 1952 and University of Florida in 1957, where she received a degree in Fine Arts. Following her college years Susy lived in Manhattan, NY and Oakland, California before returning to St. Petersburg with her two young daughters in 1964. She worked for the Pinellas Park Sheriff's Department as a deputy and then as an elementary school teacher in Ybor City. In 1970 Susy moved with her family to Fruitland Park, where she taught generations of students at Fruitland Park Elementary School, once winning Teacher of the Year honors. Susy is remembered by many former students as the teacher who always had a pet in the classroom, whether an abandoned kitten or an orphaned squirrel or opossum. Susy was a lifelong animal lover and environmentalist. She loved nature and was formerly a member of Lake County Rails and Trails. In her retirement she dedicated herself to volunteer work with the Salvation Army and Leesburg Public library. She was active for decades in her church, Holy Trinity Episcopal, where she served on the altar guild and as a senior warden. She also had a long time personal ministry at Holy Trinity, caring for the feral cats who lived in the churchyard. Susy loved to cook and was a "foodie" before the word was in popular usage, subscribing to Bon Appetit and Gourmet magazine. She was a collector of cookbooks and loved exotic recipes. Susy loved to travel, visiting Ireland, England, Greece, Italy, France, Turkey and the Caribbean. Her favorite US destination was Anna Maria Island where she spent many happy times with her sister, her daughters and her grandchildren. Susy is predeceased by her beloved sister Nancy MacKenzie, brother-in-law Gordon MacKenzie and nephew Eric MacKenzie. She is survived by daughters, Nancy Franklin of Weirsdale, Florida; and Jennifer (Mark) Rolph of Miami, Florida; as well as three grandchildren, Samantha Rolph, Cailin Rolph and Ian Rolph also of Miami. Susy's surviving family also include nephews Scott MacKenzie and Kenneth (Deana) MacKenzie and niece Amy (Barry) Pavia; great-nieces Mariah and Morgan MacKenize, Hannah and MacKenzie Pavia, and great-nephews Trevor, Braydon and Brennan MacKenzie. Per Susy's wishes, no funeral service will be held. A memorial service will be arranged at a later date. In lieu of flowers the family requests that a charitable donation be made in Susy's memory to an animal or environmental charity of your choice. Susy supported Best Friends Animal Society, North Shore Animal League, Alley Cat Allies, Farm Sanctuary and others. Susy was loved by many, and will be missed by all whose hearts she touched. May she rest now in the arms of the angels.

The family of Susy Brown created this Life Tributes page to make it easy to share your memories.

Send flowers to the Brown family.