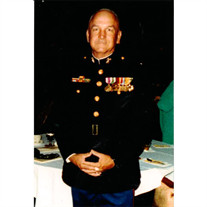 Samuel Eugene Driggers Sr. of Astor, Florida, at the age of 83, passed away on February 16, 2022. He was born on May 2, 1938 in Deland Florida. He was the only son of the late Ralph and Olivia Driggers. Sam, as he was known to friends and family, had two (2) older sisters, Hilda Woods and Laura Lou Lucas, who preceded him in death. Sam had three (3) children with his late wife, Maryanne (Fink) Driggers. He is survived by his sons; Samuel Eugene Driggers Jr. of Davis, California, James Andrew Jonas Driggers of Stafford, Virginia and daughter Patricia Anne Driggers of Pierson, Florida. Through his children he was a grandfather to seven (7) granddaughters, four (4) grandsons and great grandfather to two (2) great grandsons and another great grand-child on the way. After his first wife passed away, Sam remarried on April 28th of 1995 to Brenda Endicott Driggers of Astor, Florida. He became the stepfather to two (2) sons Thomas Joseph Shannon of Gilbert, West Virginia and Trampas Jeremy Shannon of Hanover, West Virginia. He also had two (2) grandsons and two (2) granddaughters through this marriage. Sam and Brenda were able to spend their married years travelling and enjoying their blended family after he retired from the United States Marine Corps (USMC). Sam joined the Marine Corps in June of 1956. He attended boot camp at Parris Island, South Carolina. Upon completion of boot camp he transferred to I.T.R. at Camp Geiger, North Carolina. Upon completion of I.T.R. he was assigned to Headquarters 10th Marines, 2nd Marine Division, at Camp Lejeune, North Carolina. While at 10th Marines he made two (2) MED cruises and three (3) VIEQUES cruises. Over the course of his 38 years of service, Sam completed two (2) tours in Vietnam. He served duty stations in California, Florida, Japan, North Carolina, Tennessee and Virginia. Through the Marine Corps, Sam completed Officer Candidate School and The Basic School as well as attending the Avionics Officer Maintenance Course. He graduated with the Military equivalent of an Electronic Engineering Degree. After numerous and varied assignments, in 1985 Sam was assigned to Marksmanship Training Unit Weapons Training Battalion, Marine Corps Development and Education Center, Quantico, Virginia as the officer in charge of the USMC Rifle Team. Sam had a true love of marksmanship and was a Distinguished Shooter who has been written up in many records of the Rifle Team. During the five (5) years as the OIC, the team won four (4) Interservice and four (4) National Championships. Later he was reassigned with the Battalion to the Schools Section where he served as the assistant to the Officer in Charge of the Schools. In July of 1990, Chief Warrant Officer IV Samuel Eugene Driggers Sr. retired. But he was reactivated for Operation Desert Shield. He returned to Quantico, Virginia where he served his final years with the Weapons Training Battalion MCCDC until he fully retired in May of 1994. Sam was a member of the Volusia Masonic Lodge from August 31st 1983 to his passing. He served as Worshipful Master in 2000 for Volusia Lodge #77 and District Deputy Grand Master of District 16 for 2006. Sam was a beloved husband, father, grandfather and great grandfather. He will be missed by many but to some he was a living legend for his dedication, skills and larger than life presence. A Celebration of Life service will be held Saturday February 26th at 11 am at the First Baptist Church of Astor 24731 Ann Street Astor Fl 32102. The family is asking in lieu of flowers please consider donating to: Emory L. Bennett Veterans Home 1920 Mason Ave Daytona Beach 32117.

Samuel Eugene Driggers Sr. of Astor, Florida, at the age of 83, passed away on February 16, 2022. He was born on May 2, 1938 in Deland Florida. He was the only son of the late Ralph and Olivia Driggers. Sam, as he was known to friends and family,... View Obituary & Service Information

The family of Samuel Eugene Driggers created this Life Tributes page to make it easy to share your memories.

Send flowers to the Driggers family.