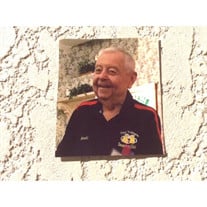 Rudy Ruckert passed away unexpectedly on Sunday, January 16th. He was the first born to Otto and Ilse Ruckert on October 10, 1933 in Plainfield NJ and raised in Metuchen, NJ. He was 88 when he passed. The Ruckert family spent several years in Germany and returned to Metuchen. Rudy graduated from Perth Amboy Vocational School (Class of 1956) and throughout his career he managed teams manufacturing electronic components. Rudy retired from Siemens in 2002. Throughout his life he lived in New Jersey, Pennsylvania, and Georgia before locating to The Villages in 2004. It was here that he came out of his shell and blossomed into the lively, gregarious character we all knew and loved. Rudy was one of the most unique, outgoing individuals many of us will ever likely meet. He had a wonderful sense of humor and for those that had the pleasure of knowing him, he enjoyed sharing it. He never met a stranger and was always excited to see you. When you walked through town with him it was like walking with a local celebrity. His friendships meant the world to him and he still kept in touch with many of his childhood friends. He deeply appreciated the time he got to share with others. If you invited him to a gathering, he would show up 15 minutes early, start talking about leaving shortly after he got there, but ultimately, he would stay for hours and hours. He may not have been the life of the party, but everyone knew he was there. Our gatherings will certainly be a little quieter now and lacking the flare that only Rudy could add. He had a fashion sense that was all his own and while you wouldn't find those fashions in GQ magazine, he wore them confidently. He was a kind, honest man who wore his heart on his sleeve. He cared deeply about his fellow man and never considered harming another; be it person or animal. Rudy was an active member of the Deutscher Club, Opera Club, Church on the Square and Northlake Presbyterian Church. He is survived by his sister Lysbeth, his brother Horst, sister-in-law Suzie, all 3 of them Villagers, and many nieces and nephews. Online condolences may be left at beyersfuneralhome.com. Once you are there, select "Obituaries" and search for Rudy Ruckert. A celebration of Rudy's life with a reception will be held on Sunday, February 20, 2022 at 12:00pm at Laurel Manor Recreation Center in The Villages. In lieu of flowers, donations in honor and memory of Rudy Ruckert can be made to the American Warrior Initiative (AWI), a nonprofit that helps provide service dogs to veterans or alternatively to a charity of your choice. The donation can be made online at www.AmericanWarriorInitiative.com or by check payable to American Warrior Initiative and sent to AWI at 4750 S Biltmore Lane, Madison, WI 53718 attention Paula Wilcox. A receipt will be provided and please note in honor of Rudy Ruckert on the check's memo line. Arrangements entrusted to Beyers Funeral Home, Lady Lake, Florida.

Rudy Ruckert passed away unexpectedly on Sunday, January 16th. He was the first born to Otto and Ilse Ruckert on October 10, 1933 in Plainfield NJ and raised in Metuchen, NJ. He was 88 when he passed. The Ruckert family spent several years... View Obituary & Service Information

The family of Rudy Ruckert created this Life Tributes page to make it easy to share your memories.

Send flowers to the Ruckert family.