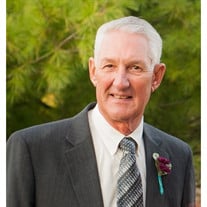 ROLAND (Rollie) CLARENCE WOODBECK, 76, passed away quietly on Thursday evening, December 9, 2021, at The Villages Regional Hospital in The Villages, FL. The first of two boys, he was born to Orland and Edna (Pape) Woodbeck on March 9, 1945. Rollie graduated from Owen-Withee High School and went on to earn a Bachelor of Science degree from the University of Wisconsin-Eau Claire. He married Shirley Petersen on October 11, 1966. When he was a young man Rollie's favorite summer job was working at a riding stable in Hayward, WI. After graduating from college, Rollie took a job working for his alma mater. After three years he transferred to Menomonie, WI to work at UW-Stout. In 1975 he made the last transfer to UW-Whitewater, where he worked in the administration area until his retirement in 2000. During this time Rollie earned a master's degree in education from UW-Whitewater. Rollie enlisted in the Wisconsin Army National Guard in his senior year of high school. Throughout his life he continued to be a supporter of the armed forces and volunteered with one of his favorite charities, Combat Veterans to Careers. On July 31, 1999, Rollie took a second shot at love and married Audrey Kiefer. Her career took them to California, New Jersey, and finally Chicago, where they lived until retirement, when they moved to The Villages, FL in 2013. Their love of adventure and travel took them to places like Hawaii, Germany, Scotland, and even Kanab, UT. They took advantage of retirement and tried to find a new adventure every year. Rollie was most passionate about golf and was talented enough to achieve a PGA apprenticeship. He made many friends through his days on the course and at the pro shop and was well-known in his Wisconsin Badgers golf cart. Rollie also enjoyed dancing, especially square dancing and line -dancing. You could often find him holding down the dance floor on the Squares at The Villages. Surviving Rollie are his wife, Audrey; his sons, Daniel Woodman (Rachel Schindler) and David Woodbeck (Kristin); three grandchildren, Samantha and Max Woodman and Emma Halverson; his brother, Terry Woodbeck (Kristin); his stepdaughter Melissa Pezzuto-Heiting (Michael Heiting); and the family doggie, Mitzi. Rollie was preceded in death by his parents and an infant daughter. A funeral mass will be held on Saturday, January 29, 2022, at St. Vincent de Paul Catholic Church in Wildwood, FL. A burial service and memorial will be held next year in Wisconsin. Memorials can be made to Combat Veterans to Careers or Best Friends Animal Society (links below). Donate - Combat Veterans to Careers or to Best Friends Animal Sanctuary: Your gift helps save lives year-round | Save Them All | Best Friends Animal Society - Best Friends Animal Society. Arrangements entrusted to Beyers Funeral Home in Lady Lake, Florida.

ROLAND (Rollie) CLARENCE WOODBECK, 76, passed away quietly on Thursday evening, December 9, 2021, at The Villages Regional Hospital in The Villages, FL. The first of two boys, he was born to Orland and Edna (Pape) Woodbeck on March 9, 1945.... View Obituary & Service Information

The family of Roland "Rollie" Woodbeck created this Life Tributes page to make it easy to share your memories.

Send flowers to the Woodbeck family.