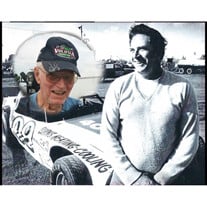 Robert (Bob) Underwood, age 85 passed away on Tuesday, May 8th, 2018 from Parkinson's disease at his home in Umatilla Florida. He was the widower of Beverly Churcott Underwood. They shared 58 years of marriage before her passing in 2011. They began their marriage years living in Vassar, Michigan then moved the family to North Lake (Otter Lake, Michigan) in 1968 where they lived until moving to Umatilla, Florida in the fall of 1985. Bob was born in Flint Michigan, the son of the late Milo and Margaret Underwood. He was preceded in death by two brothers and his sister and brother-in-law, Ralph Underwood (Beverly) of Sebastopol, California, Don Underwood (Madelyn) of Flint, Michigan and Doris Underwood LaBarge (Ken) of Flint, Michigan. Bob had two brothers-in-law and a sister-in-law, the late Gary Churcott (Babe) of Vassar, Michigan, Bill Churcott of Vassar, Michigan and Patricia Gawne of Umatilla, Florida and by his mother in law Mildred Churcott Gawne and Cyrus Gawne of Tawas, Michigan. He served 2 years in the United States Army in the early 50's, based in Colorado Springs, Colorado as a Military Police Officer before marrying the love of his life Beverly Churcott of Vassar, Michigan in 1953. Bob was a devoted father and husband. His goal in life was to give them all the love and laughter he could while guiding and supporting them to adulthood. Bob enjoyed 5 decades of auto racing from building to driving then as a spectator supporting his son (Rob) who started driving in the mid 70's at Auto City and Dixie Speedway. Bob retired from General Motors (Buick Division) in 1985 after celebrating 30 years of service. Upon retirement, he built their dream log home in Umatilla, Florida from the ground up where he lived for the past 33 years. Bob is survived by his children, Laurie (Greg) Daniels of Osakis, Minnesota, Rob (Jodi) Underwood of Umatilla, Florida and Wendi Underwood of Grand Island, Florida. Bob has 7 grandchildren, 9 great grandchildren, countless nieces and nephews who he loved dearly. The funeral service will be held on Monday, May 14th 2018- 10:00 A.M. at Hanlin Funeral Home in Millington, Michigan followed by a brief graveside service at Millington Cemetery. Visitation will be Sunday, May 13th-3:00P.M. till 8:00 P.M. Memorial donations/in lieu of flowers may be made to any Child Charity or Parkinson's Foundation.

Robert (Bob) Underwood, age 85 passed away on Tuesday, May 8th, 2018 from Parkinson's disease at his home in Umatilla Florida. He was the widower of Beverly Churcott Underwood. They shared 58 years of marriage before her passing in 2011. They... View Obituary & Service Information

The family of Robert Underwood created this Life Tributes page to make it easy to share your memories.

Send flowers to the Underwood family.