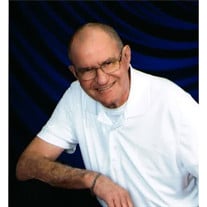 Robert A. (Bob) Greer passed away peacefully on March 16, 2022. Bob was born in Brooklyn, New York on December 24, 1938 to the late Samuel and Margaret (Ryan) Greer. Bob married Sheila on July 11, 1968 in Fall River, Massachusetts. Bob was a Veteran of 21 years with the United States Air Force, retiring in 1978. He again retired from contract employment with Immigration Services in St. Albans, Vermont in 2004 where he was a file clerk. Bob enjoyed fishing, bowling, and golf. While living in Vermont, he was an active member of his church, The Church of Nativity in Swanton, Vermont. He was a member of the Knights of Columbus, Parish Council, and Lector. Bob liked to make people laugh. He is survived by his wife Sheila of The Villages, FL; sons: Robert Jr. (Kathy) of Corunna, IN, John (Crystal) of Swanton, VT; 5 grandchildren, 5 great-grandchildren; sisters: Ellen Mulcahey of Cape Coral, FL, Patricia Scott of Brooklyn, NY; and several nieces and nephews. A mass of Christian burial will be held at St. Timothy Catholic Church in Lady Lake, Florida on Monday, March 28, 2022 at 8:30AM, interment to follow at Florida National Cemetery in Bushnell, Florida. In lieu flowers, please consider making a contribution in his name to the Alzheimer's Association. Arrangements entrusted to Beyers Funeral Home of Lady Lake, Florida.

The family of Robert A. Greer created this Life Tributes page to make it easy to share your memories.

Send flowers to the Greer family.