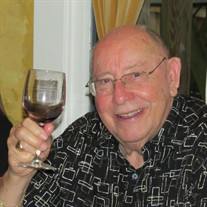 Robert M. Braun, 95, died on June 3, 2022 in Clermont, Florida. He was born in Birmingham, Alabama, January 18, 1927, son of John A. and Elizabeth M. Braun. He graduated from Phillips High School in Birmingham. In 1945, he moved to St. Petersburg, Florida, with his family. He attended St. Petersburg Junior college, where he met his wife of 74 years, the former Wilma Frances Lycett. In 1954, he moved, with his family, to Leesburg, Florida, where he established Besco Electric Supply Company. During his career in the wholesale electrical business, he was a board member and served as Vice President of the Southern Region of the National Association of Electrical Distributors; past president of the former Southern Independent Electrical Distributors and a board member of Imark. He was a board member of the former Citizens National Bank of Leesburg, Florida, and a life member of the Leesburg Masonic Lodge; a member of the Orlando Scottish Rite Bodies, and Bahia Shrine Temple of Orlando. He was a member of The Hugenot Society of South Carolina. In addition to his wife, he is survived by sons; Douglas (Donna) of Clermont; Stephen (Susan) of Leesburg; Andrew (Laura) of Leesburg; a daughter; Elizabeth A Suber (William) of McDermott, Ohio; twenty-one grandchildren, seventeen great grandchildren, and extended family including several nieces and nephews. Preceding him in death were his parents and two brothers and a sister, John A. Braun, Jr., David O. Braun, and Jo Ann Bobbitt (Richard). A Memorial Service will be conducted at St. James Episcopal Church in Leesburg, Florida, on Wednesday June 8, 2022 at 4 PM, followed by a reception in St. James Parish House. In lieu of flowers, donations may be made to St. James Memorial Fund or Cornerstone Hospice. Beyers Funeral Home is in charge of local arrangements.

The family of Robert M. Braun created this Life Tributes page to make it easy to share your memories.

Send flowers to the Braun family.