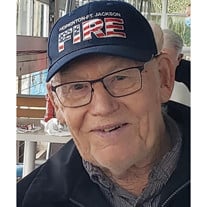 Richard (Dick) M Daby, born on August 15, 1937 to Myron and Luella Raymond Daby in Hopkinton, NY, passed away Tuesday, November 2, 2021, at Ted and Dianne Brandley House in Summerfield, FL in their loving care. He worked on the 465-acre family dairy farm in Hopkinton NY, and held other various jobs around the north country until he was drafted into the the US Army in 1962. He returned to assist on the family farm after his father passed and then entered employment at Alcoa where he remained for 32 years retiring in 1999. He was deeply involved in the community and often volunteered assisting town members in need. He was Assistant Scout Master from 1959-1962. He was a foundational member of the Hopkinton Ft. Jackson Fire Department serving in numerous leadership positions for 34 years and remained as an active member for 64 years. He served for many years as an active member in the Hopkinton Historical Group and was formerly a member of the Hopkinton Congregational Church. He married Linda (Converse) Daby on August 17, 1962 who predeceased him on December 13, 2009. He is survived by their three children: Michael (Ashley) Daby of Syracuse, NY, Tammy (Frank) Frary of Adams Center, NY and Amy (Jeff) Brownell of Winthrop, NY, nine grandsons and nine great-grandchildren that he was extremely proud of. He is also survived by his second wife, Virginia (Russell Smith Dyke) Daby. They were married on October 9, 2010. His step children Jim Smith, Tim (Sheila) Smith, Keely (Matt) Pemberton. He is also survived by his siblings: Diane Crump, Allen (Sandy) Daby, and Irene (Dale) Burnett and several nieces and nephews. An aunt also survives him, Dorothy Darpino of Herkimer, NY. He is predeceased by his siblings Gordon Daby, Harris Daby, and Edna Daby Cheney and a brother Gilbert Daby who died in childhood. A celebration of life and burial will be planned in Spring 2022 in Hopkinton. Donations can be made to the Hopkinton Ft. Jackson Fire Department at 2876 State Highway 11B, Hopkinton, NY 12965.

Richard (Dick) M Daby, born on August 15, 1937 to Myron and Luella Raymond Daby in Hopkinton, NY, passed away Tuesday, November 2, 2021, at Ted and Dianne Brandley House in Summerfield, FL in their loving care. He worked on the 465-acre family... View Obituary & Service Information

The family of Richard "Dick" Daby created this Life Tributes page to make it easy to share your memories.

Send flowers to the Daby family.