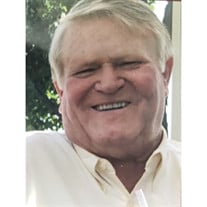 Richard Clyde Abercrombie passed away unexpectedly on November 7, 2021 at the age of 76. He was born July 22, 1945 in Greenville, MS. Richard and the love of his life, Sharon Abercrombie are residents of the Villages, Florida but spent the majority of his life living in Pueblo, Hawaii and Denver Colorado. Richard is survived by his wife of 40 years, Sharon Abercrombie of The Villages, Florida, Daughter Misty Sterk, Jim Sterk, and Grandsons Tyler, Colton and Jake Sterk of Eagle, Idaho. George and Rosalie Rusovick of Rochester Minnesota, Jim and Evie Densford of Penrose Colorado, Jan DiSanti and Tracy McManus of Denver, Colorado and Cousins Carolyn and Lewis Freeman of Jena Louisiana Richard graduated from Mississippi State University with a B.S .and Masters Degree in Electrical Engineering. He joined the Military in 1964. Richard served in the Navy from 1964 to 1970 as a Navy Diver and served in Vietnam. Richard traveled to many parts of the world where his skills and excellence as a Navy Diver were greatly recognized. His career included employment with Gates Rubber Co., Jacobs Engineering, and Redi Engineering. He retired in 2015. Rick was a true engineer and Renaissance man. He took a 5 year hiatus from his engineering career to become a home builder. He was always interested in the latest home building and newest construction technologies. A lifelong learner, Rick had many talents and interest including deep sea and fly fishing, traveling and camping, and home wine making, to name a few. He was a gifted musician/guitarist, song writer and enjoyed performing in many clubs in the 1970's. In his later years, he became passionate about gemology and spent hours at his workbench faceting gemstones. Rick will be remembered for his affection for the beloved dogs he and Sharon had over the years. Everyone who knew him will miss his quick wit and sense of humor including this favorite: "I never was the man I used to be"

Richard Clyde Abercrombie passed away unexpectedly on November 7, 2021 at the age of 76. He was born July 22, 1945 in Greenville, MS. Richard and the love of his life, Sharon Abercrombie are residents of the Villages, Florida but spent the majority... View Obituary & Service Information

The family of Richard Clyde Abercrombie created this Life Tributes page to make it easy to share your memories.

Send flowers to the Abercrombie family.