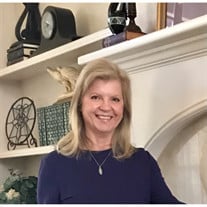 Paula Thacker Madden suddenly and unexpectedly passed from this life on April 8, 2022 at home. Born in Toledo Ohio to Paul and Mary Thacker, Paula moved to Lake County in 1972 and later that year met her future husband George. They were married on May 30, 1976 at St. Paul's in Leesburg and she commenced a lifetime of devotion to her family, creating a warm and nurturing environment for George and their children Janelle and Patrick. As an empty nester, Paula developed an interest in oil painting and became an accomplished artist, decorating her home with a number of beautiful pieces. Paula served the Lake Eustis Museum of Art (now known as Lake County Museum of Art) as a volunteer, fundraiser, and board member. Paula maintained a strong and abiding faith in our Lord and Savior Jesus Christ and had a gift for relating to young children. She enjoyed teaching Children's Liturgy of the Word classes at St. Paul's. She also served on the parish Liturgy Board and was involved in training the Altar Servers and coordinating their scheduling. Over the years, Paula also taught classes at several church-affiliated preschools in Leesburg. Paula's other interests included her "grand-dogs", her adopted Australian Shepherd Aggie, collecting shells and sea glass at Florida beaches, and FSU football, especially during the Bobby Bowden years. Normally quiet and soft-spoken, Paula's vociferous cheering would turn heads at stadiums during critical moments of games. From her father Paul Thacker, Paula acquired a passion for working the soil, growing tomatoes, pineapples, sweet potatoes, lettuce, cabbage, onions, and more. She also enjoyed propagating and maintaining various ornamental plants and trees in the yard of her Leesburg home and at her "getaway in the woods" on the banks of the Withlacoochee RIver North in Madison County, Florida near Lee. Paula was preceded in death by her father, Paul Thacker. She is survived by her husband George, her daughter Janelle of California, and her son Patrick of Michigan; her mother Mary Thacker of The Villages, sister Sandi Snider of Ohio, and brothers Terry (Cathi) of Georgia, Pat (Renee) of Idaho, Tony (Genny) of Bellview, and Eric (Phil) of West Virginia and many nephews and nieces. In lieu of flowers please consider a donation in Paula's memory to the Lake County Museum of Art at 213 Ruby Street, Tavares FL 32778. Online donations may be made at the museum's website, https://lakeartmuseum.com/ >

Paula Thacker Madden suddenly and unexpectedly passed from this life on April 8, 2022 at home. Born in Toledo Ohio to Paul and Mary Thacker, Paula moved to Lake County in 1972 and later that year met her future husband George. They were married... View Obituary & Service Information

The family of Paula T Madden created this Life Tributes page to make it easy to share your memories.

Paula Thacker Madden suddenly and unexpectedly passed from this...

Send flowers to the Madden family.