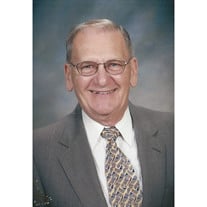 Paul W. Schrak Beloved Husband and Father Paul William Schrak, 89, of Summerfield, Florida went home to be with God on March 22, 2022. Paul was born in May 1932 to Margaret (nee Husveth) and Edward Schrak. He spent his formative years in Basking Ridge, New Jersey and graduated from Bernardsville High School in 1950. Paul served in the US Navy from 1951-1955 and was stationed onboard USS Missouri during the Korean War. He married Kathryn (nee Norton) in February 1958, who predeceased him in 1979. In June, 1980, Paul married Diana (nee Leccese Licata), his wife of 41 years. Paul worked 42 years as an electrical engineer and draftsman for ASCO before retiring in 1993 and returning as a consultant for 4 additional years. Paul was a devout Catholic deeply convicted by his faith, a lifelong lover of Jazz, and an avid fan of Billie Holiday and the New York Mets. He participated in a bowling league and played the saxophone throughout his youth. Paul's single most important commitment was being a faithful and devoted husband and father. His selfless, loving dedication made him an indelible treasure to his family. The simplest pleasures in life brought joy to Paul as long as he was with his "Mrs. Daisy." Adored by relatives and friends alike, affectionately remembered as "St. Paul" his quiet, soulful, humorous, and kind demeanor touched the lives and hearts of many. Paul is survived by his wife Diana; his children, Stephen Schrak, David (April) Schrak, Michael (Linda) Schrak, Paula (Charles) Steinkuehler, Danny Licata, Doug Licata, Dana (Karen) Licata Szoke; his grandchildren, Chelsea, Kathryn, and Isabella; and his brother Edward Schrak. He was predeceased by his parents, Margaret and Edward Schrak, and his sister Rosemary Schrak. As a Military Veteran, Paul's ashes will be interred at Florida National Cemetery, Bushnell, Florida with a visitation headstone to commemorate his life. A private memorial and celebration of Paul's life will be held in May with family and close friends followed by a luncheon honoring Paul. Forever Alive In Your Heart By Kelly Roper I am not truly gone If you keep me in your heart. I'll be forever alive, And we'll never have to part. In lieu of flowers, donations may be made in Paul's name to a cause he was greatly devoted to: National Right To Life Organization, https://donate.nric.org/ Arrangements entrusted to Beyers Funeral Home of Lady Lake, Florida

Paul W. Schrak Beloved Husband and Father Paul William Schrak, 89, of Summerfield, Florida went home to be with God on March 22, 2022. Paul was born in May 1932 to Margaret (nee Husveth) and Edward Schrak. He spent his formative years in Basking... View Obituary & Service Information

The family of Paul W. Schrak created this Life Tributes page to make it easy to share your memories.

Send flowers to the Schrak family.