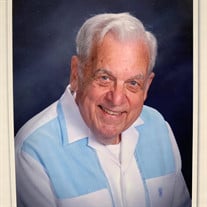 Paul R. Denzler, 88, of Leesburg, FL, passed away on May 27, 2022, surrounded by family and friends. Paul was born on February 25, 1934, to Paul A. and (Marie) Alice Denzler (nee Redmond) in Manhattan, NY. He was raised on Staten Island, NY, where he attended St. Peter's Grammar and High School. He graduated from Manhattan College with a B.S. in Electrical Engineering in 1955. Paul served in the U.S. Navy from 1957 to 1960 with an Honorable Discharge at the rank of Lieutenant (JG). From there he spent 34 years at the Philadelphia Naval Shipyard beginning as a Production Engineer in the Submarine Radar Group and moving up to Project Coordinator for Aircraft Carriers in the Shipyard Design Division until his retirement in March of 1989. Paul and (Jacqueline) Jeannine Johnson were married on January 4, 1961, and settled in Woodbury, NJ, where their four children were born and raised. In Paul's retirement, he studied Hawaiian culture and dance and enjoyed five trips to Hawaii as well as a trip to Alaska. He proudly served the community by volunteering his services at St. Paul's Church as a lunch coordinator, as well as assisting with the Catholic Community Television Network. His best vacations were time spent with his children, grandchildren and great-grandchildren in DE, PA, TX and VA. Paul is survived by his wife of 61 years, Jeannine; their children and their spouses, Sharon Fassold (Vince Tolson), Diane Denzler (fiancee, James Bender), Michael Denzler and Karen Bargelski (Daniel); 4 grandchildren; 2 great-grandchildren; 2 brothers, Frank (Carol) Denzler and James Denzler; 2 nephews and their families. Paul was dearly loved and will be sadly missed by many. In lieu of flowers, please donate to The American Cancer Society and St. Marys Submarine Museum, St. Mary's, GA.

The family of Paul R. Denzler created this Life Tributes page to make it easy to share your memories.

Send flowers to the Denzler family.