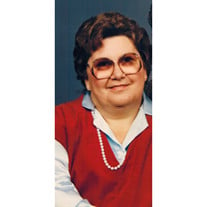 Nina was a homemaker. She enjoyed planting flowers, gardening, sewing, and crocheting. She loved animals. She was a devout Christian and enjoyed worshiping the Lord through song and music. She was preceded in death by her biological parents,... View Obituary & Service Information

The family of Nina May Crozier created this Life Tributes page to make it easy to share your memories.

Nina was a homemaker. She enjoyed planting flowers, gardening,...

Send flowers to the Crozier family.