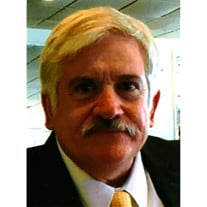 The family of Nicholas LaRosa is heartbroken to announce the untimely passing of a beloved husband, father, grandfather, brother, uncle, cousin, and dear friend. Mr. Nicholas LaRosa went home to the Lord on the second day of December 2021. Born in Brooklyn, New York on June 1, 1953, to Stella and Nicholas Charles LaRosa, Nick went to school in New Smyrna Beach and described the experience as one of the most memorable years of his life. There he had the opportunity to enhance his talents as a fine musician and lover of music. Nick is survived by his beloved wife and best friend Helen (Roberts) LaRosa who he married on July 16, 1977. They settled in Woodhaven and later Commack, New York where they raised two devoted sons, Nicholas (Sarah) and Joseph. In 2004 they began a new life in the place they still love and call home, The Villages. Nick became an expert in building and repairing golf carts. In his spare time, he enjoyed golf, raising parrots and tending to his demanding salt water fish tanks. However, his greatest joy was found in the many nieces and nephews who surrounded him. They described him as a good, gentle and kind soul content to live life with his family. Family first was Nick's motto. The latest addition to the LaRosa clan is his granddaughters Sophia and Violet. Just hearing their names would bring the biggest smile to his face and he looked forward to every visit from his special girls. Nick is also survived by his sister, Cathy Schuhlein of Long Island, New York and always missed his deceased half-sister Alice (Ronnie) Raineri. In recognition of his love for future generations, the family asks that in lieu of flowers you would consider following Nick's lead and contribute to St. Jude's and Shriner's Children's hospitals, two of his favorite charities. A visitation will be held Monday, December 13, 2021, from 3:00 to 5:00 PM. A mass will be held the following day, Tuesday, December 14, 2021, 8:30 AM, at St. Timothy's Catholic Church. Arrangements entrusted to Beyers Funeral Home of Lady Lake, Florida.

The family of Nicholas LaRosa is heartbroken to announce the untimely passing of a beloved husband, father, grandfather, brother, uncle, cousin, and dear friend. Mr. Nicholas LaRosa went home to the Lord on the second day of December 2021. Born... View Obituary & Service Information

The family of Nicholas LaRosa created this Life Tributes page to make it easy to share your memories.

The family of Nicholas LaRosa is heartbroken to announce the...

Send flowers to the LaRosa family.