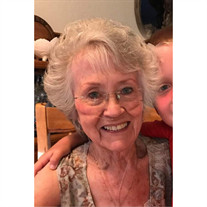 Nancy Helen McWilliams, 77, of Leesburg, FL, passed away on October 11, 2021. She was a beloved Wife, Mother, Nana, GiGi, Sister and Aunt. She was born on April 6, 1944 in Baltimore, MD, to Marion and Florence (Cooper) Sykes. She was one of four children; identical twin sister Carol Zerniak of Tavares, FL, brother Gerald (Raquel) Sykes of Ft Worth, TX, and Marilyn Sykes (deceased). She was married to Daniel T. McWilliams (deceased) in 1964 in Rochester, NY. She moved with her family from New York to Florida in 1977 and lived in Central Florida until her death. She enjoyed crafts, searching for thrift store treasures and raising her children. Nancy was a lover of the fine arts. She enjoyed the crafts like ceramics, as well as making intricate afghans. She was a beautiful, strong woman who was proud of her family with every ounce of her being. Her loving and nurturing ways always made sure to shine through. She was a firm believer that the early bird caught the worm, and never knew how to kick up her feet and take a nap. She believed that time is precious and why put something off until tomorrow, if you can do it today. She preached cleanliness is next to godliness and you could never give any decent excuses as to why you were behind on laundry or housework. She knew what it was to take care of a family, and did it with honor and grace. Dinner was always at 5, and we all better have our hands washed and be gathered around the table. And if you didn't go back for seconds, it was obviously an insult to the chef. She took pride in everything she did. Down to the way she took care of herself with such eloquence. You'd never catch her looking a mess, or not put together. She wouldn't leave the bedroom without putting her face on and fluffing her curls. Always put your best foot forward She was a lover of entertainment. She loved her shows, keeping up with each and every one of them. She loved having Facebook at the tips of her fingers to communicate and check up on everyone so conveniently and in recent months she had stumbled upon TikTok, which had really caught her eye. (Even the questionable ones) she loved to keep up with what was going on. Junking Tuesdays with her sidekick and other half Carol were some of the best days! She enjoyed more than anything running from one end of lake county to the other hitting every thrift store in between. She was a sucker for deals and that girl could shop until she dropped! She always pushed the value of a dollar, and how one mans trash is another mans treasure. Just because it isn't useful to a person any more doesn't mean it cant be useful to the next. She also could get lost in a casino if given the opportunity, grandpa would have to go on a search and rescue to pull her off of the slot machines. But in her defense she usually always had a lucky hand. They had the kind of love that could move mountains. In the years he has been gone, she was here on earth with us patiently waiting for the day she would be reunited with her love and now she is free of pain and sickness, worry or fear, dancing with him in the sky. Jesus said she was just so special, he called her home to make her an angel of our very own. Bless her soul, we will all meet again one day. She is survived by her three children; Kim (Steve) Mizell of Leesburg, FL, Tim (Yeni) McWilliams of Huntsville, AL, and Terri McWilliams of Paisley, FL. She also leaves six grandchildren; Candace Croughwell, Tim McWilliams, Nate McWilliams, Kalea (John) English, John Woodbury, and Blake Gibner; and seven great grandchildren. A memorial service for friends and family will be held on Saturday, October 16, 2021 at 10am at Beyers Funeral Home in Umatilla. In lieu of flowers, the family requests memorial contributions to Lake Cares Food Pantry or The Open Door homeless drop-in shelter. Arrangements entrusted to Beyers Funeral Home of Umatilla, Florida.

Nancy Helen McWilliams, 77, of Leesburg, FL, passed away on October 11, 2021. She was a beloved Wife, Mother, Nana, GiGi, Sister and Aunt. She was born on April 6, 1944 in Baltimore, MD, to Marion and Florence (Cooper) Sykes. She was one of... View Obituary & Service Information

The family of Nancy Helen McWilliams created this Life Tributes page to make it easy to share your memories.

Nancy Helen McWilliams, 77, of Leesburg, FL, passed away on October...

Send flowers to the McWilliams family.