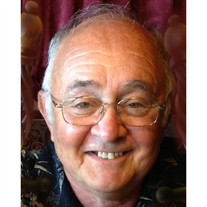 Mircea "Mike" Petru Lungociu, 75, went to see his Savior on January 24, 2022. Mircea was born August 16, 1946 in the city of Cluj, Romania to the late Petru Lungociu and Florica (Sirbu) Lungociu. He is survived by his loving Mama bear of 22 years, Sandy, her children Steven (Alyssa) Mezsick and Nicole (Jim) Witte, as well as several dear cousins: Linda (David) Jackson, Rodica (Thomas) Cipu, Cornell (Renee) Lungociu, and Michael (Kimberly) Lungociu. Grandpa Mike dearly loved his eight grandchildren: Josiah, Eliya, Hezekiah, Nehemiah, Adam, Zephaniah, Hosanna and Lydia. Mike graduated from the Polytechnic Institute of Timisoara (Romania) with a degree in electro-mechanical engineering in 1969. He played soccer for the city team (Stinta Timisoara). Mike's dream of coming to America came true when he arrived on December 15, 1971. His trip was sponsored by his uncle, Nick Lungociu, who graciously hosted Mike when he first arrived. Mike graduated from Purdue in 1977 with a master's degree in industrial engineering and settled in the Indianapolis area. Since 1981, Mike often reflected upon how grateful he was for his freedom as an American citizen. Mike had a 24-year career with Allison Transmission/General Motors. After retirement, Mike and Sandy moved to The Villages, Florida where he resided until his death. We praise God that Mike accepted Jesus into his life on October 17, 2018. Mike's love of soccer continued with being a referee in Maryland and Indiana. Mike enjoyed farming in Mooresville, Indiana - raising cows (and riding his bull Caesar), baling hay, and driving his green tractor. He loved to fish and enjoyed thousands of holes of golf. He enjoyed Florida life, including swimming with his grandkids and taking them on golf cart rides. Storytelling came naturally to Mike, and some of the grandchildren's favorite memories were on grandpa's lap. Mike will be remembered for his large personality, stubbornness, kindness, fun-spiritedness, fierce desire to protect his family, ability to chat with all, and his big-hearted willingness to help anyone. We will celebrate Mike's life on Sunday, February 13, at noon at Temple Shalom of Central Florida, 13563 County Road 101, Oxford, FL. Arrangements entrusted to Beyers Funeral Home of Lady Lake, Florida.

Mircea "Mike" Petru Lungociu, 75, went to see his Savior on January 24, 2022. Mircea was born August 16, 1946 in the city of Cluj, Romania to the late Petru Lungociu and Florica (Sirbu) Lungociu. He is survived by his loving Mama bear of 22... View Obituary & Service Information

The family of Mircea "Mike" Petru Lungociu created this Life Tributes page to make it easy to share your memories.

Send flowers to the Lungociu family.