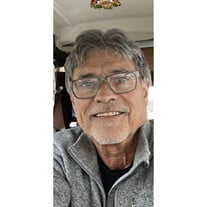 Michael Belew, age 65, passed away Monday October 11, 2021 at his home after a long and courageous battle living with cancer. He was born November 21, 1955 in Flagstaff, Arizona, the son of Clarence and Gloria Belew. Mike grew up in Phoenix, Arizona where he graduated from Central High school and later attended Phoenix University. He was owner of Airline Ground School and was the youngest sanctioned F.A.A. Designated Mechanic Examiner in the United States. At the same time, he also worked for Sperry and later Honeywell Corporation before starting his career with Continental Airlines and United in which he retired in 2020 after 35 years of distinguished service as an International Maintenance Fleet Controller. Mike was passionate about his golf game and enjoyed playing with his friends at any course he could get a tee time. He was also loved traveling, having gone all over the world with Patricia enjoying the foods, wine, and music of the various cultures. Seldom did he go without his clubs or his music as he was a good at both. He enjoyed being with his family and a good day of hard work outside cutting trees or just drinking a cold beer. What was very unique about Mike is his excitement for life! He never gave up and always had a very positive, upbeat attitude and never met a stranger. He is survived by Patricia Poling, his wife of 7 years of the Villages; 1 son Nathan (Ian) Belew of Chimacum, WA., 3 daughters - Chelsea (Michael) Beaven of Lanesville, IN., Cristina (Travis) Lazo of Tomball, TX., Britany Belew of San Antonio, TX.; 2 stepdaughters Kathleen (Rob) Shepherd of Mesa AZ., Jessica Cheney of Gilbert, AZ. ; 6 grandchildren Bryce Lazo, Gavin, Ava, Audrey Beaven, Abigail and Daniel Lazo; 1 brother Andrew Belew of Palm Beach, FL. ; 2 nephews, Andrew and Christopher Belew, ; 3 nieces, Olivia Belew, Daniela O`Laughlin, and Jasmine Belew. He is preceded in death by his parents, Clarence and Gloria Belew, daughter Shannon Belew, Brother Lawrence Belew and sister Yolanda Mier. Arrangements entrusted to Beyers Funeral Home in Lady Lake, Floirda.

Michael Belew, age 65, passed away Monday October 11, 2021 at his home after a long and courageous battle living with cancer. He was born November 21, 1955 in Flagstaff, Arizona, the son of Clarence and Gloria Belew. Mike grew up in Phoenix,... View Obituary & Service Information

The family of Michael Belew created this Life Tributes page to make it easy to share your memories.

Send flowers to the Belew family.