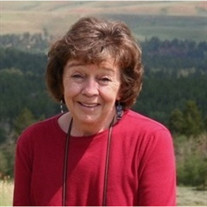 Lorraine Marie Rodgers Quinn, 70, of the Village of Bonita in The Villages, FL, died on June 30, 2019. Lorraine was born September 9, 1948, in Lusk, WY, to James Rodgers and Thelma Kinnaman. She was preceded in death by her parents, three brothers, James Rodgers, Larry Rodgers, and John Rodgers, and her beloved husband, Reed Quinn. She is survived by her daughter Colleen Hilton and son in law Ken of Casper, WY, two grandsons, Kenneth Hilton of Laramie, WY and Reed Hilton of Casper, WY, her great granddaughter Mackenzie Hilton of Laramie, WY, her nephew Mike Rodgers (Mary) of The Villages, FL, and her niece Vickie Cisewski (Gary) of Silverton, OR. Lorraine grew up in Lance Creek, WY until 1960, when her father retired and moved the family to Sheridan, WY. After graduating from Sheridan High School, she attended Sheridan Junior College for two years, and then received a B.A. degree in English in 1972 from Colorado Women's College in Denver, CO. Lorraine started a very successful career as a federal investigator for the Department of Defense in 1975, becoming the first female Special Agent in the Denver office, and working her way up to being the Special Agent in Charge. She put this career on hold in 1990 for travel. Lorraine married Reed Quinn in Dallas, TX, on March 17, 1990. They enjoyed life on the road in their RV until 1992, when they settled in Florida for winters and continued RV travel in summers. The couple lived in Gainesville, FL from 2000 to 2009 for Lorraine's employment as a federal investigator. After Lorraine's retirement in 2009, the couple moved to The Villages. Lorraine loved life in the Villages, where she quickly endeared herself to her new friends. She was instrumental in helping to organize neighborhood activities and oversaw a network of street captains responsible for welcoming newcomers. She took up golf and was an enthusiastic line dancer, participating in several classes. She helped to organize a neighborhood book club and enjoyed multiple game groups, as well as many neighborhood social events in Upper Bonita. Lorraine was known for love of literature and the written word, her attention to detail, her loyalty, and her reliability. Her fun personality and clever wit will be missed by her many friends throughout The Villages, as well as by her family. A celebration of Lorraine's life will be held in The Villages at a later date.

Lorraine Marie Rodgers Quinn, 70, of the Village of Bonita in The Villages, FL, died on June 30, 2019. Lorraine was born September 9, 1948, in Lusk, WY, to James Rodgers and Thelma Kinnaman. She was preceded in death by her parents, three brothers,... View Obituary & Service Information

The family of Lorraine Marie Quinn created this Life Tributes page to make it easy to share your memories.

Lorraine Marie Rodgers Quinn, 70, of the Village of Bonita in...

Send flowers to the Quinn family.