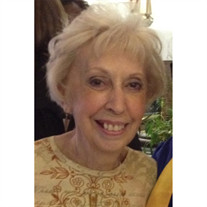 Lorraine "Lori" Burns (93) was born February 2, 1929 in Fall River, Massachusetts. She baptized Lorraine Marguerite Giguere, the only child of Leo and Yvonne Giguere. Lorraine grew up in a Canadian French community, speaking French as her first language and attending a French parish and a French convent school, Jesus Mary Academy. From a very early age Lorraine's deep religious faith had a profound influence on her life. Following high school, Lorraine attended and graduated from Bishop Lee Drama School in Boston, Massachusetts which she would later call some of the happiest years of her life. She spent several years as a performer, most notably as a member of a traveling troop of the Rockettes, including being cast for their Radio City Christmas show. Lorraine's love for music and dance would last throughout her life, and her family now sees it lived out through Lorraine's granddaughter, Sarah Rose Burns. After her father's death, Lorraine would go on to work several years in Sheraton reservations alongside her beloved mother, with whom she shared an apartment in Boston. Lorraine's close relationship to her mother would later be reflected in her close relationship to her son. In 1968 Lorraine married William E. Burns, Sr. and moved to Winchester, Massachusetts, where she gave birth to her son in 1971. Upon her husband's retirement in 1979, Lorraine and her family moved to Continental Country Club in Wildwood, Florida. Lorraine would remain in that home for nearly forty years. In the aftermath of her husband's death in 1982, Lorraine dedicated herself to raising her son and giving him the best upbringing, she could offer. During this time, she returns to the workforce and established a career in cosmetics and fragrances, working primarily in Belk department stores managing and promoting many product lines, including Lancôme, Elizabeth Arden, Giorgio, and Givenchy. People who were fortunate enough to know Lorraine found her to be a remarkable, memorable woman - a true lady with a gracious heart. To the end she did her best to put her family first, never wanting to be a burden to anyone. Despite her gradual decline in health and quality of life, Lorraine never wavered in her faith in God. She had inner peace, trusting in the providence of God and looking forward to her eternal reward. She taught us how to prepare for our final years through her selflessness, simplicity, and faith. Lorraine is survived by her son, William Burns, Jr., her granddaughter, Sarah Burns, her stepdaughter, Marjorie MacLean, her former daughter-in-law, Nancy Burns, and the extended family that cared for her in her final years. A Funeral Mass will be held at St. Timothy Catholic Church, Lady Lake, Florida, on Friday, February 18th, at 10 a.m. Arrangements entrusted to Beyers Funeral Home of Lady Lake, Florida.

Lorraine "Lori" Burns (93) was born February 2, 1929 in Fall River, Massachusetts. She baptized Lorraine Marguerite Giguere, the only child of Leo and Yvonne Giguere. Lorraine grew up in a Canadian French community, speaking French as her first... View Obituary & Service Information

The family of Lorraine Marguerite Burns created this Life Tributes page to make it easy to share your memories.

Send flowers to the Burns family.