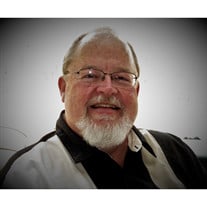 Kenneth Allen Wall, 67, of Webster, FL passed away on March 26, 2022 following a courageous battle with dementia. Sadly, dementia is an evil enemy that cannot be defeated. Ken was born in Leesburg, FL on April 7, 1954 to Clyde and Fay Wall, both who have preceded him in death. He graduated from South Sumter High School in 1972 as Senior Class President and Class Salutatorian. He attended Andrew College in Cuthbert, Ga, where he was inducted into and elected President of the local Phi Theta Kappa Honor Society; selected as a member of Who's Who in American Junior Colleges; and received an Andrew College Andy Award, the highest honor given to students who have demonstrated highest level leadership, services, and achievement. He continued his education, graduating with honors from the University of Florida with a Bachelor's Degree in Education with a minor in Biology. He completed his Master's Degree in Biological Sciences at Montana State University in Bozeman, MT, where he also performed postgraduate work towards a PhD Degree in Biological Sciences. He is survived by brothers James (Kay) Wall of Webster, FL; Paul (Janice) Wall of Monroe Ga.; and sister Becky (Richard) Hewett of Fruitland Park, FL. He is also survived by a host of nieces and nephews. Although he never married, his kids number in the thousands, from the many years he taught in high school and college throughout his academic life across the country. His last teaching assignment began in 1995 at North Marion High School in Citra, FL and continued until his retirement in 2015. With a heart too big to keep to himself, he touched countless lives with his kindness and generosity. He was the teacher that students went to for fund-raiser donations; He was the unassuming person at the next dining table that paid your tab...just because; He was the man who gave money to a young woman in Wal-Mart when it looked as if she was having a bad day; He was the uncle that purchased the cool (but educational) electronic toys and gadgets for nieces and nephews. He loved science fiction and was a voracious reader of all things sci-fi. He collected comic books, coins, currency, art, and music. The Beatles were the best. He loved to travel and was our tour guide for several family vacations. Lightning did not strike when he knelt at the altar in the Vatican Museum. Hot dogs were his Sunday lunch specialty. He had more shoes than most women. When diagnosed 7 years ago, there was no self-pity or sorrow; no sadness or despair. Having studied neuroscience, he was aware of his fate and future and accepted it with quiet resolve. In our sadness, we are grateful that his long struggle has come to an end and comforted to know that he is whole again with Mom and Dad. In lieu of flowers, please consider a donation in Ken's name to your favorite charity. A private family service will be held at a later date, at which time he will be interred in the family plot at the Linden Cemetery.

Kenneth Allen Wall, 67, of Webster, FL passed away on March 26, 2022 following a courageous battle with dementia. Sadly, dementia is an evil enemy that cannot be defeated. Ken was born in Leesburg, FL on April 7, 1954 to Clyde and Fay Wall,... View Obituary & Service Information

The family of Kenneth Allen Wall created this Life Tributes page to make it easy to share your memories.

Send flowers to the Wall family.