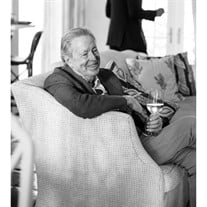 Keith Padgett passed away at his home in Howey-in-the-Hills, Florida on December 6, 2021. Keith was born in West Palm Beach, Florida on October 1, 1947, and grew up in Pahokee, Florida. A star athlete in high school, Keith attended the University of Arkansas at Monticello and Florida Southern University on athletic scholarships before transferring to the University of Florida, where he graduated with a degree in journalism. After graduation, he married Patricia Floyd of Leesburg, Florida. They lived in Gainesville where Keith worked for the University of Florida's Office of Development and Alumni affairs, ultimately becoming the Associate Director. Keith and Patty relocated to Leesburg where he first worked for Patty's father in the citrus industry. He then worked as a stockbroker at Prudential Bache before eventually joining Entertainment Coaches of America, where he served as President and CEO for many years. After that time, Keith and Patty retired to Howey-in-the-Hills. Keith loved his family, the state of Florida and the Florida Gators; he was patriotic to his core. Keith loved music, especially Elvis. He had many, many long lasting friendships, and he was known for his kind and easygoing nature. Keith had the opportunity to live a full life full of many experiences that, as a boy from humble beginnings, he never failed to appreciate. As he would say, "for a boy who never thought he'd get out of Pahokee, I sure have lived and seen a lot." Keith is survived by Patty, his wife of 49 years, his daughters Kristin (Keith) and Stephanie (Forrest), his son Preston (Sarah), grandsons Harris and Wells and sister, Ann Rita. Keith was preceded in death by his parents, Claude and Zona Padgett, and his brother, Denny Padgett. A service will be held on Monday, December 13, 2021 at Morrison United Methodist Church in Leesburg at 2 p.m., followed by a reception at Starlight Ballroom. In lieu of flowers, the family plans to set up a scholarship fund in support of Pahokee High School students. Checks may be made out to the Keith R. Padgett Memorial Scholarship Fund and mailed to 26136 Avenida Las Colinas #1B, Howey-in-the-Hills, FL 34737. Beyers Funeral Home and Crematory, Leesburg in charge of all arrangements.

Keith Padgett passed away at his home in Howey-in-the-Hills, Florida on December 6, 2021. Keith was born in West Palm Beach, Florida on October 1, 1947, and grew up in Pahokee, Florida. A star athlete in high school, Keith attended the University... View Obituary & Service Information

The family of Keith Padgett created this Life Tributes page to make it easy to share your memories.

Keith Padgett passed away at his home in Howey-in-the-Hills,...

Send flowers to the Padgett family.