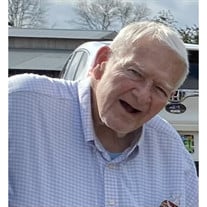 Joseph Donovan Riley, Jr (Don) passed away peacefully on Sunday, January 16, 2022 at the Villages Rehab & Nursing Center in The Villages, Florida. He was happy to be visited by many family over the past few weeks and was especially happy on his last day. Don was born on August 8, 1934 in Hartford, CT to Joseph D Riley, Sr and Mary Agnes (Brewer) Riley who predeceased him. His family lived in Ridgewood, NJ and Elsmere, NY before moving to Needham, MA. Attending schools in Needham, Don excelled at football, wrestling and track. He attended Yale University, playing football for the Elis, and graduating with a B.S. in chemistry in 1956. After graduation, Don began his career with Mobil Oil Corporation, working in NJ, TX, AK and finishing in New York City. Don helped his dad build their Cape Cod home when he was young. He met the love of his life, Ruth Teresa Heafey, on Cape Cod, MA and they were married in November 1961. Ruth was his beloved partner for 49 years until her death in 2010. Don created a memorial scholarship in Ruth's name at the nursing school at Yale University. In retirement, Don and Ruth enjoyed years at their Candlewood Lake home in Brookfield, CT and Marco Island, FL. Don later moved to The Villages in FL. Don took great pleasure in collecting antique tools and traveling to tool shows in retirement. Living on the water in CT and FL, Don enjoyed boating. He also loved to travel on cruises to new adventures. Costco and Aldi will miss Don as he loved to shop to pick up items, even if he had a dozen in stock. Don is survived by his brother, James B Riley, and sister-in-law, Marilyn Riley of Green Valley, AZ and his sister-in-law, Clare Archer and brother-in-law, Robert Archer of Unionville, CT. He was predeceased by his sister, Gerry Spence and brother-in-law, Gavin Spence of Columbus, GA and his sister-in-law, Elinor O'Brien and brother-in-law, John O'Brien of RI. He adored spending time with his family including his 17 nieces and nephews and their kids. A burial service will take place in Farmington, CT in May 2022. In lieu of flowers, donations can be made to Alzheimer's Association in Don's memory. Arrangements entrusted to Beyers Funeral Home of Lady Lake, Florida.

Joseph Donovan Riley, Jr (Don) passed away peacefully on Sunday, January 16, 2022 at the Villages Rehab & Nursing Center in The Villages, Florida. He was happy to be visited by many family over the past few weeks and was especially happy on... View Obituary & Service Information

The family of Joseph Donovan Riley created this Life Tributes page to make it easy to share your memories.

Send flowers to the Riley family.