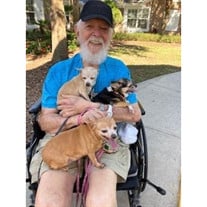 Joseph (Buddy) Leroy Omega Jordan, Jr., 88, went to be with his Lord and Savior on February 15, 2022. Buddy/JO was born in Norfolk, VA to Hilda Frances Harper Jordan and Joseph Leroy Omega Jordan, Sr. In addition to his parents he was preceded in death by his wife of 56 years, Frances KAY Jordan and his sister, Jean Jordan Ennis. He leaves behind two sons and a daughter, Joe (Elsa) of South Korea, Janet Watkins (Doug) of Bushnell, FL, Paul (Tina) of Vancouver, WA, 7 grand-children, and 8 great grand-children. Buddy grew up in Norfolk, VA where he found his love for hunting, fishing, and motorcycles. At the age of 17, just a week after his birthday, he enlisted in the US Army. He proudly served his country in the Korean War, fighting for the freedom of people he never knew. When he returned from Korea he married his sweetheart, Kay Middleton. His military career took him to many locations from the Pacific to Turkey. Because of his career, his family was blessed to see many places in the world that others may never experience. Buddy retired from the Army after 21 1/2 years. Retirement took Buddy and his family to Titusville, FL where he was able to continue doing the things he loved: hunting in eastern NC, fishing in the Atlantic off West Palm Beach, visiting race tracks and even riding the high banks of Daytona. He was a member of the Titusville Rifle and Pistol Club, and was the president for many years. He stayed in touch with others around the world through is participation in the Amateur Radio Club. His interest in guns, motorcycles and cars was not lost on his sons as they, too, enjoyed those same interests. He was interested in world history, inspired by many of the places where he was stationed in the Army. He was interested in art and left behind many sketches to be enjoyed. He enjoyed photography, leaving behind many photos to enjoy. He took every opportunity to continue learning, earning an associates degree from the local community college. As Dad, he loved his children, Joe, Janet Watkins, and Paul. He was always interested in what they were doing. He may not always have agreed with the decisions they made, but he was always supportive, and they knew he loved them deeply. As Grandpa/Grandaddy/Pawpaw he loved his grandchildren and great grandchildren and always asked, "What's new?" Buddy/Jo/Dad, will be greatly missed by those who loved him. He touched many lives though his 88 years. One thing he would want you to know about is his relationship with the Lord Jesus Christ. Of all the many achievements he made in his life, the most important is the decision to accept Jesus as his Lord and Savior. In his later years he asked many people if they were Christians. He loved to have people pray for him. A memorial service will be held at Faith Baptist Church, 1220 N. Carpenter Rd. in Titusville, FL on Thursday, February 24. Family will receive friends at 10:00, and the service will begin at 11:00. Interment will take place on Friday, February 25. Family and friends will meet at Purcell Chapel, 114 W. Noble Ave. in Bushnell, FL at 11:00 before processing to the National Cemetery in Bushnell. In lieu of flowers the family requests donations be made to Faith Baptist Church for the building fund.

Joseph (Buddy) Leroy Omega Jordan, Jr., 88, went to be with his Lord and Savior on February 15, 2022. Buddy/JO was born in Norfolk, VA to Hilda Frances Harper Jordan and Joseph Leroy Omega Jordan, Sr. In addition to his parents he was preceded... View Obituary & Service Information

The family of Joseph Leroy Omega Jordan Jr. created this Life Tributes page to make it easy to share your memories.