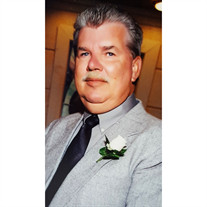 John Robert Shoemaker, 79, was born 1/6/42 in Statesville, NC to James and Thelma Shoemaker and died 11/29/21 in Lady Lake, FL. He is survived by his wife Margaret Shoemaker of Lady Lake, FL, his daughter Tanya Anderson (Mitch) of Leesburg, Fl., 3 grandchildren - Joshua Anderson (Jessica), Christina Eury (Joshua), Heather Baxley and 7 great-grandchildren - Abigail, Ethan, Braden, McKenzie, Jeremy, Kasen and Callie. He is also survived by his brother Kenneth Shoemaker (Linda), and several nieces, nephews, and great nieces and nephews. John served in the Navy 1957-1961 and he was stationed in Cuba and then was stationed on the USS Essex, an aircraft carrier, and later on the USS Pinnacle, a minesweeper. Once he left the Navy he became a professional pilot and flight instructor. His license included single engine, multi-engine, commercial and airline transport ratings as well as his instructor certification. John also served as a Police Officer in Oregon and also worked for the Georgia Bureau of Investigations. He also enjoyed working as a private investigator and in his retirement he kept busy with multiple Security Officer Positions. A man of many talents and interests, he was also a professional musician and played bass and trumpet. He sang as part of his band and they had several records released. His band had the opportunity to play at Caesars Las Vegas and to perform as the back-up band for Dick Clark's All American Road Show. As such he got to play with several well-known artists such as Chubby Checker, The Tops, The Diamonds, and BJ Thomas. John also enjoyed woodworking and won several awards for his craftsmanship in many of the shows he entered. His viewing will be Wednesday, December 8, 2021 from 10:00 am to 11:00 am followed by the funeral at 11:00 am at Beyers Funeral Home in Lady Lake, FL. Interment to follow at Florida National Cemetery in Bushnell, Florida. Arrangements entrusted to Beyers Funeral Home of Lady Lake, Florida.

John Robert Shoemaker, 79, was born 1/6/42 in Statesville, NC to James and Thelma Shoemaker and died 11/29/21 in Lady Lake, FL. He is survived by his wife Margaret Shoemaker of Lady Lake, FL, his daughter Tanya Anderson (Mitch) of Leesburg,... View Obituary & Service Information

The family of John Robert Shoemaker created this Life Tributes page to make it easy to share your memories.

Send flowers to the Shoemaker family.