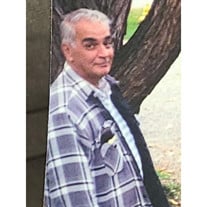 On February 27, 2022, after a brief illness, John M. Hall, 80, of Leesburg, FL passed away. John was born in Cleveland, OH and graduated from Strongsville High School (OH). After graduation, John entered the U.S. Navy and served for four years. John worked for the Tinnerman Company and then the Eaton Corporation (after Eaton purchased Tinnerman) for over 30 years. In 1999, John gleefully left the snow and sleet of Ohio behind, relocating to Florida. Those who knew John best described him as kind and funny. The phrase used most often was "such a great guy." John woke up early every day, even on weekends and after he retired. John was an avid and skilled bowler, with the trophies to prove it. John also enjoyed playing baseball on the Tinnerman team, and he liked golfing. He was a proud member of the Fraternal Order of Eagles, Aerie #4273 for over 23 years. John "went to the Eagles" 364 days a year, without fail. He was known for arriving early, reading a Western or doing crossword puzzles to pass the time, and then sitting in "his seat" at the end of the bar, joking with the women who worked there, drinking two draft beers, and then leaving to go home for a nap. John hated snakes. Really hated them. It didn't matter what kind of snake it was. He also was not overly fond of spiders or other creepy crawlies. He hated talking on the phone and would try his best to avoid it. He really, really hated coconut, marshmallow, Brussels sprouts, and liver. John's favorite cake was pineapple upside-down cake. John loved steak, especially with an endive salad. He liked cheap-ish coffee and cheap-ish beer. And he wiggled his feet when he ate something he really liked. John loved thunderstorms, often sitting outside in a poncho to better enjoy the rain. John loved his 1964 Pontiac Catalina convertible (nicknamed El Tanko). He jumped like a cat when startled. And he would clear his throat and rattle the newspaper he was reading when his kids were doing something gross or loud. John loved to say things like "Pack 'em up and move 'em out" when it was time to leave the house. When it was really hot outside, he liked to say "It's warming up quite nicely." And when it was raining, he would ask, "Think it will rain?" John is survived by his beloved wife of more than 56 years, Dot, his children Diane, Debbie, and John, and his grandson Devlin, his sister Beth and brother Doug. In lieu of flowers, plants, or other remembrances, donations may be made in memory of John to the "F.O.E. #4273 George Lawrence/Ted Keating Memorial Scholarship" in care of the Aerie Secretary at 27150 Haywood Worm Farm Road, Okahumpka, FL 34762.

On February 27, 2022, after a brief illness, John M. Hall, 80, of Leesburg, FL passed away. John was born in Cleveland, OH and graduated from Strongsville High School (OH). After graduation, John entered the U.S. Navy and served for four years.... View Obituary & Service Information

The family of John M Hall created this Life Tributes page to make it easy to share your memories.

Send flowers to the Hall family.