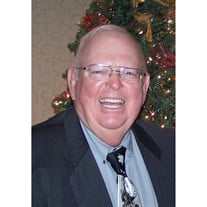 John A. Barner (JB, Jack), 83, a longtime resident of the Villages, passed away peacefully Saturday, April 17, 2021 at Estelle's House, Hospice of Marion County. He was born in Philadelphia, PA, the youngest son of Walter and Helen Barner. He married Mary F. Martin on October 26, 1957, and they had five sons. JB was a proud member of the United States Air Force for 23 years, having served in the Cold War, Vietnam, and various duty stations. JB was a loving father, grandfather, great-grandfather, and brother. JB is preceded in death by the love of his life for 51 years, Mary F. Barner, son Martin F. Barner (Fay), three brothers and a sister. He is survived by his sons Tony (Sherrie), Mike (Brenda), Chris, Tim (Carolyn) and brother Jerome (Kathryn). He is also survived by 6 grandchildren and 3 great grandchildren. A Celebration of Life will be held at the American Legion Post on CR 466 at a date and time to be named later. Those who knew JB best know he was an avid sports official, ranging from volleyball to basketball. He was a Delaware State High School Association football official for many years. He was the consummate official, even throwing his own sons out of games when necessary. His greatest sports love, though, was softball. He began work as an umpire in 1959. He was Deputy ASA Commissioner of DE in charge of umpires from 1984-1990. In 1985 he umpired the Nationals in Long Island and the Class A Women's Championships in GA in 1998. JB was well known in the Senior Softball USA Leagues and his accomplishments are a testament to the man he was. As an active member in the Florida Half Century program since 1993 he not only played and umpired but also managed teams such as Shannon's Agin Relics, 3 Amigos and Hallmark Dental. In 1999 he was named Umpire of the Year for USSSA and for seven years was the Disney UIC. In 2008 JB was appointed commissioner for the 60 in FHC. He was inducted into the Senior Softball-USA International Hall of Fame for Umpires in 2011. One of his fondest moments was his induction into the Florida Half Century Softball Hall of Fame in 2015. JB will be sorely missed by his family and his many friends. In lieu of flowers please send donations to Hospice of Marion County, 2897 SE 62nd St. Ocala, FL 34474 Two Life Celebrations will be head to honor JB, one at the American Legion located at 699 W. Lady Lake Blvd, Lady Lake, Florida on June 12, 2021, starting at 2:00 pm. The second Life Celebration will be held at the Moose Lodge located in Milford, Delaware at 20142 Beaver Dam Rd. The celebration will be held on June 19th, 2021, at 2:00 pm.

John A. Barner (JB, Jack), 83, a longtime resident of the Villages, passed away peacefully Saturday, April 17, 2021 at Estelle's House, Hospice of Marion County. He was born in Philadelphia, PA, the youngest son of Walter and Helen Barner. He... View Obituary & Service Information

The family of John Barner created this Life Tributes page to make it easy to share your memories.

Send flowers to the Barner family.