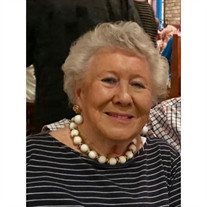 Joane Mildred (Leffler) Bouchard McNaughton, of The Villages, FL, formerly of Syosset, NY and Canton, MA, passed away peacefully on Friday, April 15, 2022, at 89 years. Joane was born on Long Island, New York, to William and Mildred Leffler. She married her first husband Frederick Bouchard in 1952. Joane and Fred had four children who they raised on Long Island in Syosset and later in Muttontown, NY. Joane had an active life raising her kids, she enjoyed playing tennis and golf, and she and Fred had a large group of close friends, many of whom she stayed in contact with until recently. Fred passed away in 1974. Two years later Joane met Thomas McNaughton, who was also widowed and had seven children. Joane and Tom married seven months later, and she moved to Canton, MA. There she raised and managed a combined family of eleven children and stepchildren ranging in ages of 5 to 22 at that time. Joane and Tom had a beautiful, devoted, and loving marriage for 43 years. They moved to The Villages, Florida following Tom's retirement in 1995. Joane was very active socially, played in several bridge groups and played golf avidly until a chronic back condition slowed her down in her later years. She enjoyed the substantial time that she and Tom spent volunteering at the Society of Saint Vincent de Paul charity organization at Saint Timothy Roman Catholic Church in The Villages. Joane had extensive friend groups in Canton and in The Villages, as well. She most loved spending time with her large family and was especially proud of her grandchildren and great grandchildren. Joane enjoyed the many family weddings, shared holidays and get-togethers in the Northeast, Florida, and Texas. She is survived by her brother William Leffler and his wife Eileen of Houston, TX; her sons Robert Bouchard and his wife Diana of Summerfield, FL and William Bouchard of Cocoa, FL; her stepdaughters Pamela D'Ambrosio and her husband Peter of Lenox, MA; Marcia Stockwell of Austin, TX; Ann Richardson and her husband Wesley of Hyannis, MA; Eleanor Farwell of Mansfield, MA and Patricia McNaughton of Hyannis, MA; her stepsons Thomas McNaughton, Jr. and his wife Gail of Andover, MA, and Peter McNaughton and his wife Patricia of Medfield, MA. She is also survived by 15 grandchildren: Michael and Andrew (Heidi) D'Ambrosio; Katherine (Kenneth) Strempel; Megan Stockwell; Elizabeth (Ryan) Vanderkolk; Christine, Jaclyn (Thomas), William and Rachel Bouchard; Kristen (Justin Fernandes) Farwell; Matthew (Michelle) and William (Angela) Farwell, and Laura, Rory, Jennifer and Henry McNaughton, as well as 12 great grandchildren and several nieces and nephews. She was predeceased by her husbands Frederick E. Bouchard and Thomas W. McNaughton, son Frederick E. Bouchard, Jr. and daughter Laurette Bouchard, and her sister in-law Rosalie McNaughton, F.M.M. Joane's funeral mass will be held on Monday, May 16, 2022, at 8:30am at Saint Timothy Roman Catholic Church, 1351 Paige Place, Lady Lake, FL 02159. Family and friends are invited. A burial and celebration of her life will occur in Canton, MA at a later date. Donations may be made in Joane's memory to the Society of Saint Vincent de Paul, 1352 Paige Place, Lady Lake, FL 32159. Arrangements entrusted to Beyers Funeral Home and Crematory, Lady Lake, FL.

The family of Joane Mildred (Leffler) Bouchard McNaughton created this Life Tributes page to make it easy to share your memories.