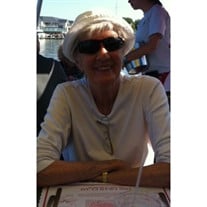 Jane H. Baker, of The Villages, Florida, passed away on May 6, 2022. She was 95 years old. Jane was born on April 26, 1927 in Brookline, Massachusetts to John and Edith (Toher) Hungler. Her family moved to Harrisburg, Pennsylvania when she was a child. Following high school graduation, Jane pursued a career as an administrative and legal assistant, first in Harrisburg, then in Washington, DC. She also took art classes in Washington. There she met Roger W. Baker, a WWII Navy veteran employed at a Federal government agency. Jane and Roger married in 1954 and moved to Stockton, California before relocating to Northern Virginia, Drexel Hill, Pennsylvania, Cooperstown, New York and Rockville, Maryland. Jane enjoyed being a homemaker to their four children while volunteering at their schools as well as pursuing artistic and other projects. When the children were teenagers Jane returned to the work environment, serving as Assistant to the Principal of Cooperstown Central School District and then Human Resources Manager at Boland Trane Services. Upon retiring, she and Roger enjoyed traveling and spending time with their grandchildren. Jane enjoyed the New York Times crossword puzzles as well as reading and was keenly interested in current events and politics. Jane is predeceased by her husband, Roger, as well as a sister, Bernadette, and brothers' John and Charles. She is survived by her children Victoria, of The Villages, FL, Joan (Thomas) Kane, of St. Petersburg, FL, Fredric (Pamela) of Novato, CA and Mark (Elizabeth), of San Rafael, CA. Jane is also survived by her grandchildren Daniel, Roger, Frank, Nick and Alison, as well as great grandchildren Luke and Rory. To honor Jane's wishes a private service and interment will take place at Florida National Cemetery in Bushnell, FL. In remembrance of Jane's life, the family asks that any charitable donations be made to The Alzheimer's Association, www.alz.org.

Jane H. Baker, of The Villages, Florida, passed away on May 6, 2022. She was 95 years old. Jane was born on April 26, 1927 in Brookline, Massachusetts to John and Edith (Toher) Hungler. Her family moved to Harrisburg, Pennsylvania when she was... View Obituary & Service Information

The family of Jane Baker created this Life Tributes page to make it easy to share your memories.

Send flowers to the Baker family.