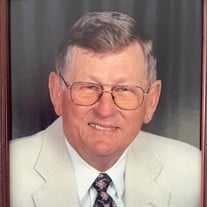 James Albert “Jim” Burry died peacefully on June 3, 2022. Jim was born in McIntosh, Florida, on August 20, 1933, to Annie Mae and Henry Burry. He graduated from the University of Florida in 1957 with a degree in Pharmacy. Many lasting Sigma Chi Fraternity friendships were made. He established Burry’s Pharmacy in 1964. He took pleasure in hiring students to serve at the soda fountain in the original pharmacy where many cups of coffee were served and many tall tales were shared. One of his greatest joys was that the pharmacy continues with James Albert, Jr. and James Albert, III serving Leesburg residents. When he served as a groomsman in his McIntosh friend’s wedding he met Gail who was the bride’s roommate at Florida Southern College. Five months later they married and recently celebrated 64 years of a very happy and wonderful marriage. Jim was a devoted husband, father, grandfather and great grandfather. Many young boys got their first taste of hunting and fishing under his tutelage. His love of the outdoors was known by many. Hunting woods in Alachua County and a vacation home on the Homosassa River kept him busy. Although he graduated from the University of Florida his football heart remained at Auburn University where he had a football scholarship. Jim is survived by his wife, Gail; his son, Jimmy Burry (Denise) and daughter Lou Ann Holton (Doug); ten grandchildren; Christopher Bonynge (Holly), Jacob Bonynge (Ed), Trey Burry, Alex Hayes (Morgan), Lizzy Burry, Katie Burry, Noah Burry, Ben Burry, Annagail Holton and Audra Holton; four great grandchildren; Olivia, Eleanor and Graham Bonynge and Harper Hayes. He will be deeply missed by his friends, family, and all who knew him. A visitation will be held on Friday evening at Beyers Funeral Home from 5-7 pm. A funeral service is scheduled for Saturday, June 11th at 10:00 am at Morrison United Methodist Church in Leesburg with internment at 3:00 at the McIntosh Cemetery. In lieu of flowers donations may be offered to Forward Paths Foundation, POBox 492109, Leesburg 34749 or Morrison United Methodist Church, 1005 W. Main St., Leesburg 34748.

The family of James Albert "Jim" Burry created this Life Tributes page to make it easy to share your memories.

Send flowers to the Burry family.