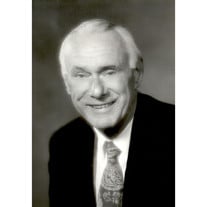 Howard was born in Cleveland and spent his youth in Lakewood, Ohio, either on a sandlot slinging fast balls in the style of Bob Feller or honing his nascent sales skills selling raffle tickets or lemonade. Howard's gift of persuasion led him to the career at which he would excel throughout his life. Howard graduated from St. Ignatius High School in 1954 and studied sociology at John Carroll University, learning to love the Catholic Church and appreciate the Catholic education which he passed down to his children and grandchildren. Howard married the love of his life, Roberta Ann Barber on September 3, 1960 at St. Luke's Catholic Church in Lakewood, Ohio. Howard and Bobbie went on to have four children, raising them in Cleveland and Atlanta. His dedication to his family and his faith was evident in the education and extracurricular support that he generously provided through his hard work and success as a national sales manager. His unwavering faith, dry wit, tenacity, and sense of honor shaped the character of his children and all those that he mentored. Howard was an example of self-discipline, never missing a morning run no matter rain, sleet or snow. He was proud to have completed two marathons. Howard and Bobbie retired in the Villages, Florida where they spent twenty-three happy years together. Howard had a peaceful passing at hospice, surrounded by his loving wife and children, moments after the recitation of the Holy Rosary. Howard is survived by his wife, Roberta "Bobbie", daughters Colleen, Mary Beth, and son Robert, seven granddaughters, seven grandsons and one and a half great grandchildren. Howard is also survived by his brother William and sister Thais. He is preceded in death by his son Howard Joseph Jr. and his parents Howard George Heller and Marie McVicker Heller. In lieu of flowers, please consider making a donation to St. Vincent dePaul Society or St. Timothy Catholic Church A memorial service will be held Friday, May 6, 2022, 8:30 AM at St. Timothy Catholic Church in Lady Lake, Florida with inurnment to follow at Lone Oak Cemetery in Leesburg, Florida. Arrangements entrusted to Beyers Funeral Home of Lady Lake, Florida.

Howard was born in Cleveland and spent his youth in Lakewood, Ohio, either on a sandlot slinging fast balls in the style of Bob Feller or honing his nascent sales skills selling raffle tickets or lemonade. Howard's gift of persuasion led him... View Obituary & Service Information

The family of Howard J. Heller created this Life Tributes page to make it easy to share your memories.

Howard was born in Cleveland and spent his youth in Lakewood,...

Send flowers to the Heller family.