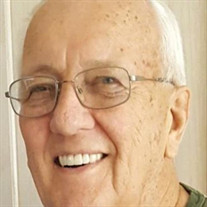 Henry (Hank) R. Clemens of Oxford, Florida drifted peacefully to heaven with his family by his side on May 21, 2022. Born on July 16, 1937 in Jersey City, NJ, Hank’s career of over 30 years began with the Bell System in the late 60’s at Western Electric in Brooklyn, NY. He relocated several times during his career moving from Brooklyn, to Massachusetts in the 70s, New Hampshire, Orlando and finally New Jersey in 1982, where he later retired from AT&T at age 52. Before “officially” retiring to the Villages eight years later, he taught marketing as a college professor at the College of St. Elizabeth and volunteered as an EMT with Roxbury Fire Co. #1 in Succasunna, NJ. He was a life-long member of the Knights of Columbus. Hank provided service to his country as an Air Force reservist from 1961-63. Hank graduated from Pace University and later earned a Master’s Degree in Business Administration from Western New England College all while working full time and helping to raise his young family. A deeply religious man, Hank shared his love of Christ by teaching CCD to youth in Orlando. He participated in and led bible study groups, was a leader in the R.C.I.A. (The Rite of Christian Initiation for Adults) program helping other adults become full participating members of the Catholic Church and served as a Eucharistic Minister. For the past several years he organized the weekly communion services at his assisted living facility which included selecting the music to complement the service. Hank was an avid reader, an extremely intelligent man who knew something about everything. He was very generous with his time and would counsel anyone who came to him for advice. He enjoyed watching Yankees baseball, conversations with friends and spending time with family. Hank is predeceased by his beloved wife Theresa (Terry) of nearly 60 years, his brother Richard and his parents Elizabeth and Konrad Clemens and Henry Schade who passed away when Henry was a young child. Hank is survived by his three children; Terry-Ann Zander (Herb) of Newton, NJ, John Clemens (Georgia) of Leesburg, FL and Laura Robinson (Brian) of Las Vegas, NV. He is also survived by his adoring grandchildren Cutter and Hunter Zander and Ella and Gianna Clemens who lovingly called him Pa Pa. A private memorial will be held in the coming months in New Jersey as he is interned at his final resting place where he will be reunited with his wife Terry. In lieu of flowers, donations can be made to a charity of your choice.

The family of Henry "Hank" Clemens created this Life Tributes page to make it easy to share your memories.

Send flowers to the Clemens family.