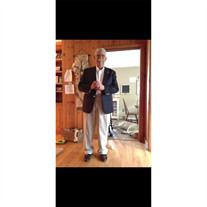 George Victor Del Vigna (86) of Leesburg, Florida passed away October 17, 2021. George's story began in downtown Chicago, on January 19, 1935. The first in his family to be born in America, he only spoke Italian when he entered kindergarten.... View Obituary & Service Information

The family of George Victor Del Vigna created this Life Tributes page to make it easy to share your memories.