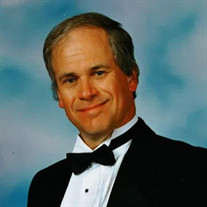 Frederick Thomas Boyd was born November 3, 1947, in Iowa City to Dr. Eugene and Louise Pullman Boyd. He died peacefully on May 8, 2022, at his home with his family in The Villages FL. He loved his life, his family and his career, and fought a patient and valiant battle with cancer. He spent most of his youth in Sarasota, Florida, and attended the Eastman School of Music in Rochester, New York. There he distinguished himself as an outstanding musician and scholar. He received Bachelor and Master Degrees as well as the Performers Certiﬁcate in Bass Trombone. At Eastman he met Mary Shannon, his wife of 52 years. Fred began his career while still a student, in the Syracuse Symphony Orchestra, where he played for over 30 years. A versatile low brass player, Fred performed on euphonium, tenor and bass trombone and tuba. At the time of his death he was still a performing member of the South Carolina Philharmonic Orchestra, The Villages Philharmonic Orchestra, and the Chautauqua NY Symphony Orchestra where he played 37 summer seasons. His career also included travel, playing with many US orchestras from Phoenix to Charlotte to New York, and internationally from Osaka, Japan, to Helsingborg, Sweden. Besides his love of music, Fred was an avid hobbyist, sometimes turning an interest into a passion or part time career. He raced bikes in motocross and enduro motorcycle events. He built a harpsichord. He was an excellent photographer, pretty decent athlete and a fearless pilot of anything that with wings. He learned to ﬂy everything from gliders to small jets, ﬂew commercially for UPS and other private airlines in Syracuse. He built his own plane which he ﬂew everywhere for over 25 years and “almost crashed only once”. In retirement he was an active member of E-ﬂyers, a remote control plane club in The Villages. Besides his wife, Mary Shannon Boyd, Fred is survived by his three sons: F. Remington Boyd of Baum Holder, Germany, Jonathan R. Boyd of Asheville, NC, Michael J. Boyd of Austin, TX, and two beloved grandsons, Miles Frederick and Keller Michael Boyd also of Austin. He is also survived by his siblings Helen Boyd Healy of Sarasota, FL, John Boyd of Manitov Springs, CO, Jim and his wife, Jill Boyd of Greeley, CO. In South Carolina, extended family ties include Shannon, Hunsucker, Moore, Manning, Cooke and Pressley in-laws, cousins, nieces and nephews. In lieu of ﬂowers, Fred’s family would like memorials sent to one of the following: The Villages Philharmonic Orchestra https://www.thevillagesphilharmonic.org/support , The South Carolina Philharmonic Orchestra, https://www.scphilharmonic.com/your-support/donate/ The Charlotte Symphony Orchestra, https://www.charlottesymphony.org/support/annual-giving/ or The Syracuse Symphoria Chautauqua Symphony Orchestra, Cornerstone Hospice or the North Lake Presbyterian Church Music Fund. A celebration of Fred’s life will be held at North Lake Presbyterian Church at 11:00 AM on Saturday, May 14th. At this service, his memory will be celebrated with performances by friends from the Villages Philharmonic, The Celebration Brass Band and other groups with whom Fred participated. A graveside service and burial will be at Hopewell A R P Church in Blackstock, SC on June 12, 2022, at 3:00 PM. Arrangements entrusted to Beyers Funeral Home in Lady Lake, FL.

Frederick Thomas Boyd was born November 3, 1947, in Iowa City to Dr. Eugene and Louise Pullman Boyd. He died peacefully on May 8, 2022, at his home with his family in The Villages FL. He loved his life, his family and his career, and fought... View Obituary & Service Information

The family of Frederick Thomas Boyd created this Life Tributes page to make it easy to share your memories.

Send flowers to the Boyd family.