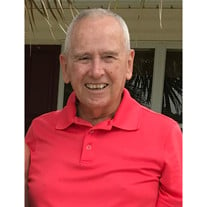 Francis Joseph "Joe" Pohl passed away peacefully on March 31, 2022, at his home in The Villages, Florida. He was surrounded by family during the last weeks of his long life. Joe was born in Grosse Pointe, Michigan, on February 14, 1929, to Clifford and Irene Pohl. His stories of growing up included memories of ice skating, learning Latin, Greek, and penmanship (his cursive writing was impeccable), and spending many weekends and summers at his family's cottage on Lake Erie. After graduating from University of Michigan with a degree in Chemical Engineering, Joe worked for the United States Army at the Ordnance Ammunition Command (OAC) in Joliet, Illinois. It was at OAC that Joe met his future wife, Ruth Kahler, and they were married in Wilmington, Illinois, on February 20, 1960. Joe was employed by Kellogg's, where his tenure lasted for over a quarter of a century, taking the family from Battle Creek, Michigan, to Sydney, Australia; Omaha, Nebraska; and Memphis, Tennessee. Joe later worked at Uncle Ben's in Greenville, Mississippi, until his retirement in 1990. Joe and Ruth belonged to bowling leagues wherever they lived, and Joe eventually became the state champion in Mississippi's over 70 men's division. Joe was an active member of St. Joseph Catholic Church in Greenville, Mississippi, where he played the organ and shared his Catholic faith with others through RCIA. After retirement, he also volunteered his time working with literacy programs and providing tax preparation assistance. In 2000, Joe and Ruth moved to The Villages, Florida. There Joe played golf (he was proud of his two holes in one) and hosted countless visits from his children and their families. He made pitcher after pitcher of margaritas for his kids, enjoyed beach trips, cruising, and taking the grandkids for golf cart rides. Joe never met a stranger. He will be dearly missed by his family and friends. Joe is survived by his wife Ruth; his children Bruce Pohl (Jessica), Jeff Pohl (Julie), Richard Pohl (Dale), Michael Pohl (Morgan Gresham), Lynn Pohl (Kevin Smith), and Kristin Regala (Shane); 15 grandchildren; 1 great grandchild; his sister Betty D'Angelo; 5 nieces; and 1 nephew. Joe was predeceased by his parents, a sister, and son Robert. A funeral Mass will be held at St. Timothy Catholic Church in Lady Lake, Florida, at 8:30am on June 6, 2022. In lieu of flowers, donations may be made to Cornerstone Hospice Foundation or to the charity of your choice. Arrangements entrusted to Beyers Funeral Home of Lady Lake, Florida.

Francis Joseph "Joe" Pohl passed away peacefully on March 31, 2022, at his home in The Villages, Florida. He was surrounded by family during the last weeks of his long life. Joe was born in Grosse Pointe, Michigan, on February 14, 1929, to... View Obituary & Service Information

The family of Francis Joseph Pohl created this Life Tributes page to make it easy to share your memories.

Send flowers to the Pohl family.