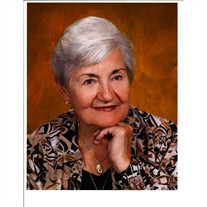 Else Bayer, 89, of The Villages, Florida went to be with the Lord on January 25, 2022 after a short illness. She was born in Ludwigshafen, Germany on June 16, 1932, daughter of Hermann Schmadel and Magdalena (Wanner) Schmadel of Germany. After leaving Germany as a newlywed in 1957 Else has lived in Canada, Connecticut, and Pennsylvania before moving to The Villages in 1996. She is predeceased by her loving husband of 38 years, Eric W. Bayer also of Ludwigshafen, Germany, her parents, her twin sister Maria Schmadel, who was a Catholic nun, sister Alice (Schmadel) Kranz, brother in law Manfred Kranz, all of Germany. Else was a very active member of St. Timothy Catholic Church where she attended Mass daily and was a Eucharistic minister and minister to the sick. She also participated in scripture sharing, Rosary makers, intercessory prayer group, and choir. She was also a member of The Villages Opera Club and German Club. She is survived by her brother Edmund Schmadel of Germany, son Michael Bayer and Judy (Nielsen) Bayer of Ontario, Canada, daughter Jutta (Bayer) Stover of Dexter, Michigan, daughter Suzanne Bayer of Southbury, Connecticut, son Marty Bayer and daughter in law Amelee (Rogers) Bayer, both of Dublin, California, son Mark Bayer of St. Cloud, Florida, 8 grandsons, 1 granddaughter, and 2 great grandsons. There will be a Funeral Mass at St. Timothy Catholic Church, 1351 Paige Place, The Villages, FL on Thursday, February 3rd at 8:30am. Memorial contributions can be made to Covenant House at covenanthouse.org or by calling 1-800-388-3888, which was one of her beloved charities. Arrangements entrusted to Beyers Funeral Home, Lady Lake, Florida.

Else Bayer, 89, of The Villages, Florida went to be with the Lord on January 25, 2022 after a short illness. She was born in Ludwigshafen, Germany on June 16, 1932, daughter of Hermann Schmadel and Magdalena (Wanner) Schmadel of Germany. After... View Obituary & Service Information

The family of Else L. Bayer created this Life Tributes page to make it easy to share your memories.

Send flowers to the Bayer family.