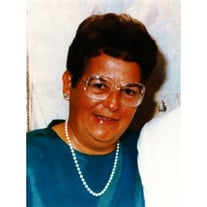 Born in Torrington, Connecticut in 1930 to Richard and Elizabeth Schroeder (deceased), relocated to The Villages in 1990, having enjoyed a full life doing the things she enjoyed most. After graduating from Williams Memorial Institute in New London, Connecticut, Betty obtained her license and degree in the cosmetology field, doing cosmetics and hair styling. Betty married her husband of 69 years, Lewis Swan in 1952 and became a military wife and followed her husband through numerous assignments both in the United States and overseas, including Germany and the Philippines until his retirement from the Air Force in 1977. She became interested in retail and went to work for the Federated Department Stores in Willingboro, New Jersey, becoming a department manager. Next, she joined the Naval Exchange systems in Groton, Connecticut as a clothing department manager until her retirement in 1990. She was of Catholic faith and a member of St. Timothy's Catholic Church here in The Villages, Florida. Her hobbies included being a volunteer at the Mark Twain library for 25 years and being an avid golfer with the Wicked Witches Ladies Group. She was also a member of the Water Blossom Ladies Bowling League for 18 years, a member of the Del Marlins Ladies Club, and a volunteer worker at the American Legion's monthly breakfasts until her retirement. She is survived by her husband, Lewis Swan; her daughter and son-in-law, Debra Dennis of Palm City, Florida; twin sister, Myrtle Carver of Naples, Florida and Groton, Connecticut; and numerous nieces and nephews in Connecticut. She was preceded in death by her sister, Joan Matthews of San Jose, California; and her mother and father. A memorial mass will be held Monday, January 10, 2022, 8:30 AM at St. Timothy's Catholic Church in Lady Lake, Florida. She will later be interred at the Florida National Cemetery in Bushnell, Florida. Arrangements entrusted to Beyers Funeral Home of Lady Lake, Florida.

Born in Torrington, Connecticut in 1930 to Richard and Elizabeth Schroeder (deceased), relocated to The Villages in 1990, having enjoyed a full life doing the things she enjoyed most. After graduating from Williams Memorial Institute in New... View Obituary & Service Information

The family of Elizabeth Betty Swan created this Life Tributes page to make it easy to share your memories.

Born in Torrington, Connecticut in 1930 to Richard and Elizabeth...

Send flowers to the Swan family.