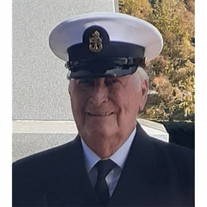 Mr. Eldon Ernest Ferrell, age 91 of The Villages, passed away peacefully on April 14, 2022. Surviving are his wife of 32 years Elizabeth Ferrell; daughters Iris Ferrell, Sharon Patterson, and Belinda Hecht; sons in law Richard Patterson and Michael Hecht; step children Robert Crawford and his wife Brenda Crawford, Deborah Meyer and her husband Randall Meyer; grandchildren Janell Hill, Bryan Eisen, Joanna Patterson, Richard Patterson Jr., and Lee Ash; step grandchildren Courtney Crawford, Thomas Crawford, and his wife Christi; great grandchildren Makayla, Landon, and Leighton Hill, and Hunter Keller; niece Vicky Langley, her children Amber Favorite, Brandy Maki, and Courtney Langley, and their children Bradyn Favorite, Madison Favorite, and Caleb Collins; niece Barbie Myers and her daughter Lora Ellen Young; nephew Doug James and his children Lindsay James , Whitney Hill, and Trevor James; great nephew Kelsie McClendon. He was preceded in death by his parents William and Gladys Ferrell, brothers Robert and Donald Ferrell, sister Lora Ellen James, niece Sherry James, and granddaughter Londen Baver. Eldon grew up on a farm in Bluejacket, Oklahoma before enlisting in the Navy at age 17. He served on The Yellowstone, The USS Gilmore, and The USS Isle Royale over the next 20 years, where he visited 29 different countries and supported our troops during the Vietnam War. After retiring from the Navy, he went back to school to get an Associates degree in Business from Park College, in Dayton, Ohio. He went on be a successful plant manager for the next 22 years at Dayton Reliable Tool in Dayton, Ohio. Retirement brought him to The Villages, where he spent 24 years living his dream of golfing, making friends, and serving as an Ambassador at Tierra del Sol for 18 years. Eldon was a true gentleman, who exemplified a strong character and was loved and respected by all. He will be greatly missed. In lieu of flowers, please send memorial contributions to Cornerstone Hospice, The Villages at 601 Mariposa Way, The Villages, FL 32162 or online at www.cornerstonehospice.org. Services will be held at Beyers Funeral Home, 134 N. Hwy 27/441, Lady Lake at 11:00am on June 24th with interment at 1:00pm at the Florida Cemetery, Bushnell.

The family of Eldon Ferrell created this Life Tributes page to make it easy to share your memories.

Mr. Eldon Ernest Ferrell, age 91 of The Villages, passed away...

Send flowers to the Ferrell family.