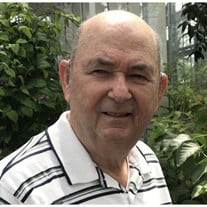 Earnest Dale Crouse, age 80 of Fruitland Park, passed away at his seasonal residence in Nantahala, NC. Dale was a loving, caring man with a big heart. He retired from the Florida Highway Patrol after 38 years of service. He is survived by his... View Obituary & Service Information

The family of Earnest Dale Crouse created this Life Tributes page to make it easy to share your memories.

Earnest Dale Crouse, age 80 of Fruitland Park, passed away at...

Send flowers to the Crouse family.